Rangers’ club sponsors from 1987 to 1990 were the Dutch national airline KLM, in conjunction with the Netherlands Board of Tourism.

It was a period where the club developed strong squads via the traditionally successful formula for Rangers from the 1960s through to the 1990s – a mixture of players developed via the youth system (Gavin Peacock, Tony Roberts etc), promising signings from the lower divisions (Paul Parker, David Seaman, Andy Sinton, David Bardsley and co.) and some carefully picked senior professionals (Ray Wilkins, Trevor Francis, Peter Reid, Mark Falco etc.) who brought maturity and capability to the playing squad, a model that it now appears the club is looking to return to at long last.

July 2016 will see the Rangers first team squad, now managed of course by the former Dutch international player Jimmy Floyd Hasselbaink and Dutch coach Dirk Heesen, holding their pre-season training in Ermelo and also playing friendly matches versus PSV and FC Groningen – their first games in the Netherlands since the summer of 1987, when pre-season matches against NAC Breda and AZ Alkmaar took place in the lead up to signing the sponsorship deal.

Barry Evans was the Deputy General Manager – UK and Ireland for KLM UK during the 1980s and 1990s and he kindly agreed to be interviewed about this period in Rangers history. 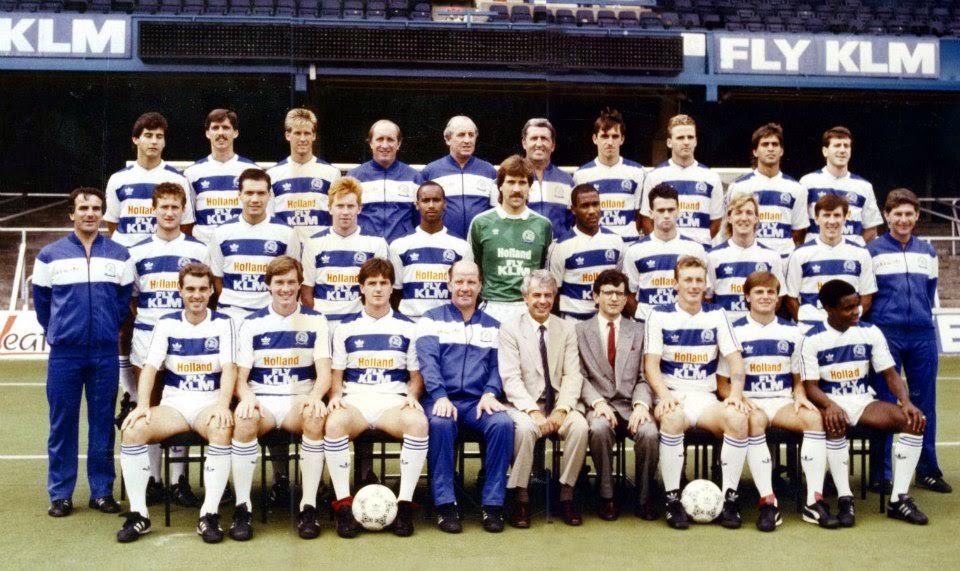 MP: How did you first become interested in Queen’s Park Rangers?

BE: A strange story, almost by mistake in fact. Together with three other pals from Thames Valley Harriers we used to do a range of things when we had a Saturday off. We had planned to go to Chelsea versus Manchester United but got waylaid by Tommy Cooper at the ‘Strand on the Green’ playing bar billiards and could not get in when we got to Stamford Bridge.

One of the chaps suggested going to QPR at home as with a 3.15pm kick-off in those days we could park outside the ground, have two pints in ‘The Springbok’ and still make the kick-off. Exeter were put to the sword, 5-0 as I remember, and the love affair began. 1963-64 I think?

MP: Whereabouts did you grow up and what were your early interests in football?

BE: I was born in Bournemouth, lived in Englefield Green, Surrey and then later Heston following my father’s career with BOAC (British Overseas Airways Corporation) – who later merged with British European Airways (BEA) to become British Airways in 1974).

I was ‘interested” in Arsenal and went along a few times when I was at primary school but the other kids interests waned and I stopped going. It was a long way when you were only 9 or 10 years old.

MP: How did you first become involved with the airline industry?

BE: At a university careers fair. I had thought about the army but the BEA approach was more interesting – so I joined as a graduate trainee. 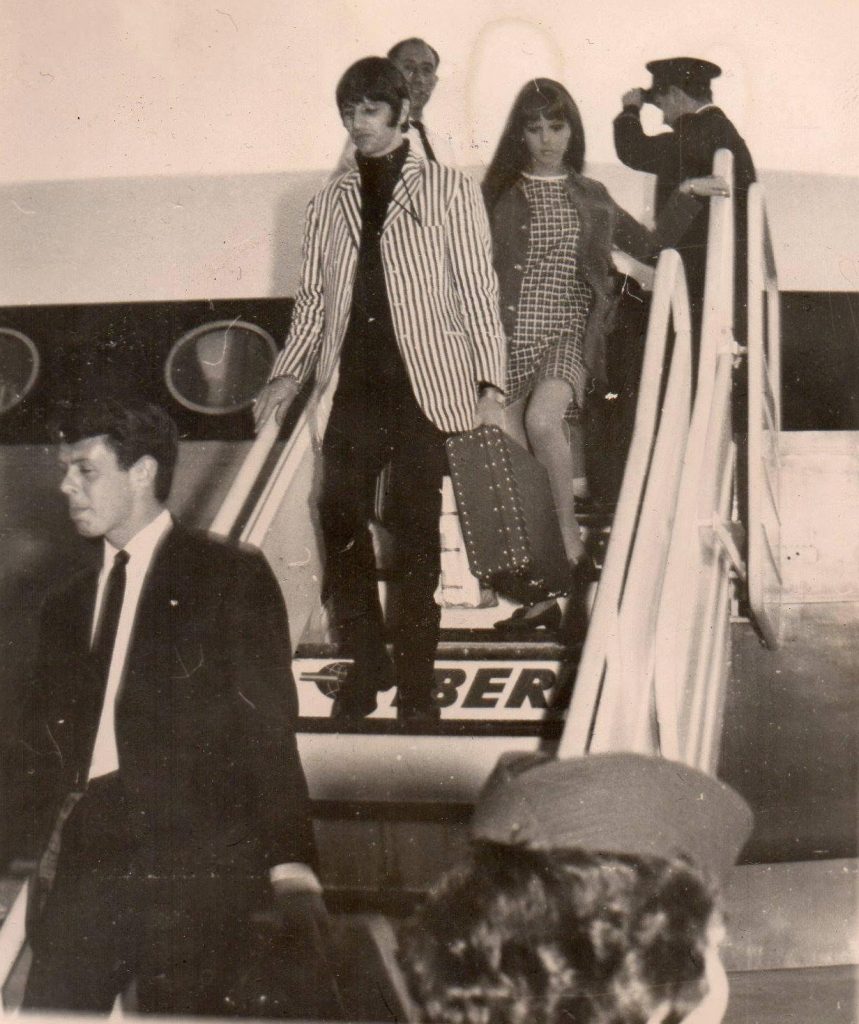 MP: Before Rangers you’d been involved in the sponsorship of Brentford that included a KLM advert being placed on the roof of one of the Griffin Park stands directly under the flight path into Heathrow, as well as shirt sponsorship. How did the Brentford connection come about and later the roof advert?

BE: It was the roof advert first. My Marketing Manager had a stencilled A5 letter from the Marketing Department at Brentford so he brought it to me to see. I got him to get some statistics on approach heights, daylight landings, 28R approaches, passenger numbers etc. We were then invited to an evening game against Swindon, which was rained off.

The Brentford Chairman, the late Martin Lange – a lovely man – introduced me to Ron Harris who had some strong mono-syllabic views on the QPR plastic pitch but he then became speechless when I said that I understood his objections as it only really suited players with any skill. Martin had to excuse himself as he laughed so much. The deal with Brentford for the roof was an absolute steal, so I made up for it by adding in the shirt sponsorship too.

MP: How hard was it to convince KLM that the sponsorship of English football teams was a good investment of their marketing funds?

BE: I didn’t ask! The philosophy in KLM, at least in those days, was “all sales are local” so it was up to the establishments to achieve their own budgets by any means possible, except that gun running and violent crime were particularly frowned upon. I just made that decision on the basis that there’s no point in having power and privilege unless you abuse it…occasionally!

MP: How did the Dutch Tourist Board also come to be involved?

BE: We did lots of joint matching fund promotional work with them and their UK Director was, and still is, a great pal and he loved the idea. 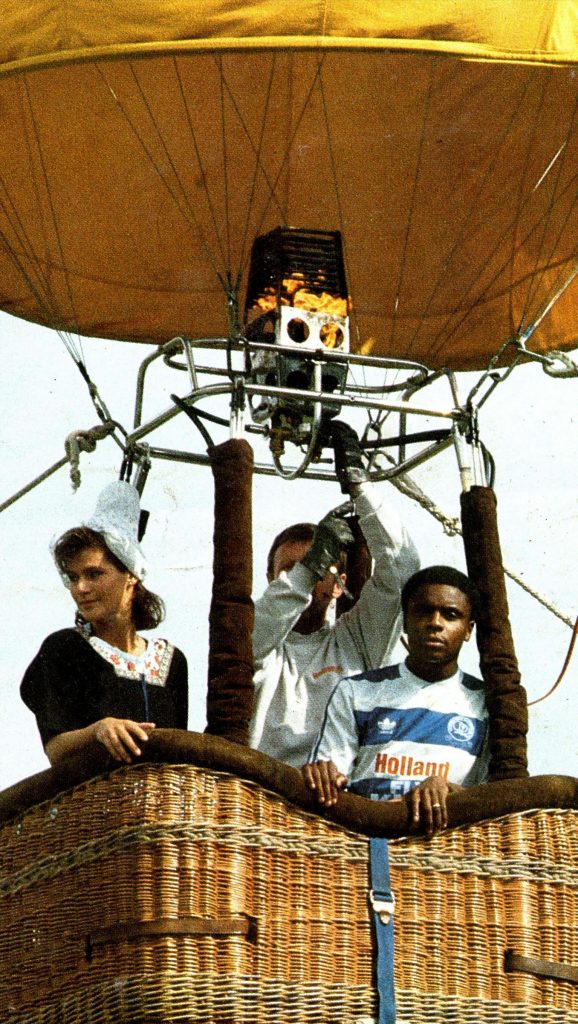 MP: How did you come to join KLM and what were your roles with them?

BE: I was Marketing Director of Godfrey Davis Car Hire after leaving British Airways and I took a call from a head-hunter. I would not have considered moving, but the car hire company was about to be sold to Europcar in 1981 and there was no way I was going to be a smaller fish in a bigger pool. I was Deputy General Manager for the UK and Ireland in KLM and, as we increased our sales fairly spectacularly every year, I was offered other bigger jobs in the company. However I was recently divorced with young sons (now devoted QPR fans) and I didn’t want to be too far away from them. And of course I had Box 21 at QPR! 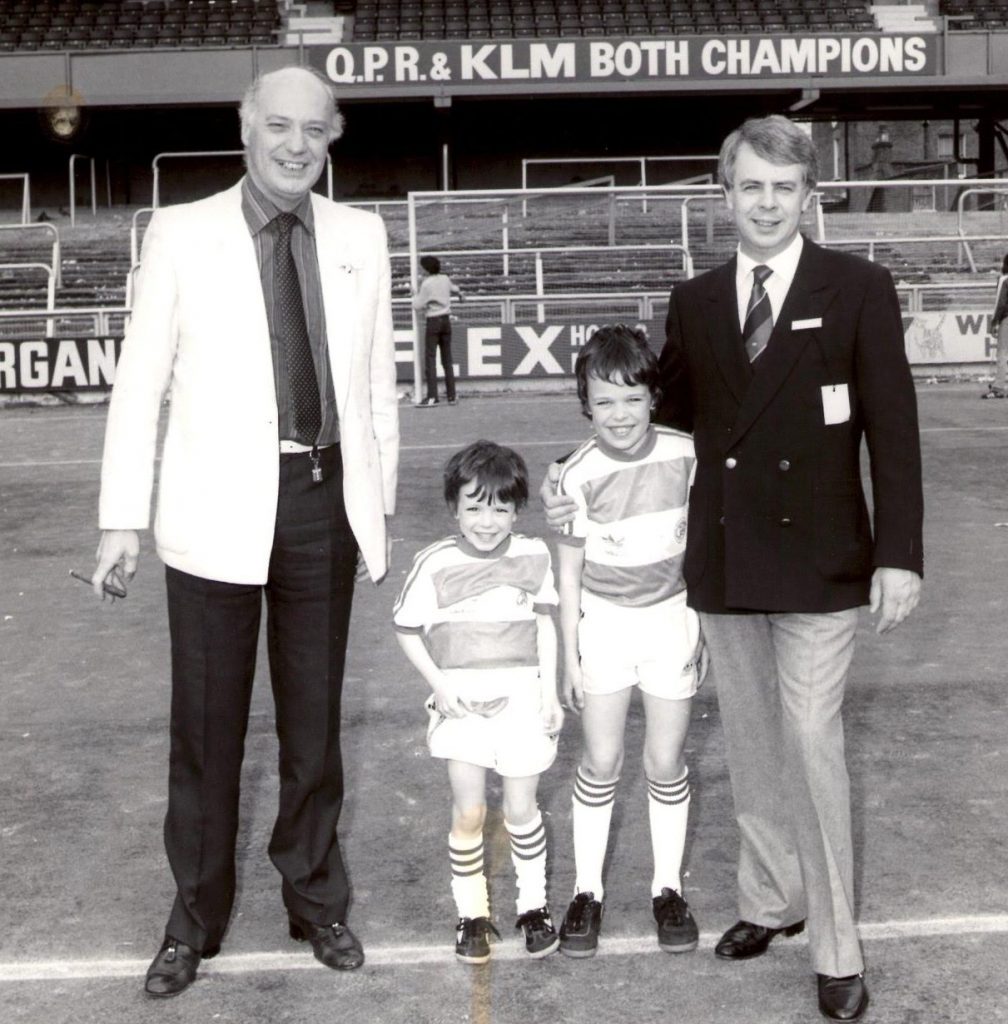 (Barry Evans and his two sons)

MP: The Executive Boxes were installed in the summer of 1981, when the Omniturf pitch was laid, the new Loftus Road stand built and new floodlights erected making the 27,000 capacity Loftus Road one of the most modern grounds in the country and the UK to be totally rebuilt for many years. What made you decide to take a box?

MP: Another KLM/football connection was the deal with the Scotland national team for the 1986 World Cup in Mexico. How did that come about? 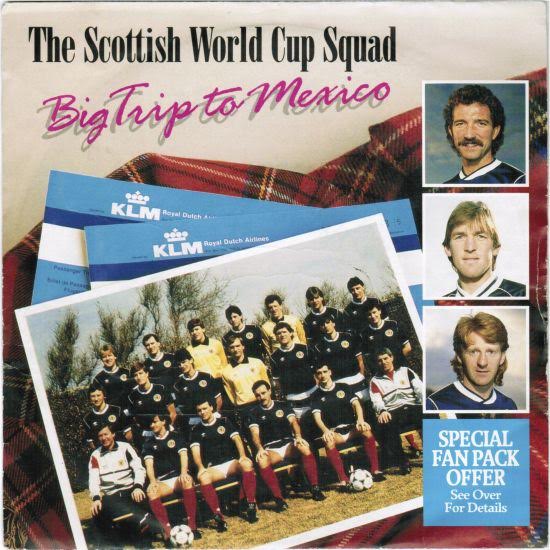 BE: They wanted to fly from Glasgow to Mexico City without transferring at LHR, so we put a bigger aircraft on the GLA/AMS route, gave them a good deal, threw in a few seats and got a lot of publicity. I still have the team’s World Cup record somewhere, complete with publicity for KLM on the cover.

MP: You have visited some of the World Cup finals. Tell us about some of your international football experiences.

BE: 1982 in Spain was great fun. I’d won some Sealink tickets at a travel event, Avis lent me a brand new car, the late Ron Pickering’s son was in sports marketing in the Netherlands so he provided the tickets, and together with four other QPR fans from my local in Bourne End, Bucks, we drove and camped outside Bilbao.

To our horror the camp site was 70% populated by French fans, mind you after their 3-1 defeat in their first game in Bilbao and the campsite resounding all night to the singing of “Au Revoir”, there were few of them left in the morning!

1986 was different. We put together a QPR group including Tony Williamson, his brother Philip, then the Head of Paramount films, and Tony Chandler. We had an agonising wait before the Poland game so my contact, the Head of the Organising Committee in Monterey, arranged for us to fly to Las Hadas, Manzanillo (location for the film “10”), for four days, where Tony Chandler and I had to share the bridal suite together with a huge double bed and a heart made of roses every morning in the pool!

1990 in Italy was another change – I convinced both ‘Business Traveller’ and ‘Executive Travel’ magazines to give us four page spreads to promote a “competition” which strangely was won by some of our biggest customers. Not so much fun in Villasimius in Sardinia as the Italian police, imported from the mainland, constantly provoked both the Dutch and English fans to justify some unpleasant scenes.

MP: KLM’s sponsorship took over from Blue Star Garages – Jim Gregory’s car business. What are your memories of Jim?

BE: I absolutely adored the man!!! He was a fascinating character from another world, with endless stories and without doubt he was the best thing ever to happen to QPR before and definitely since. I actually was sitting with him in his office in Roehampton when he bought David Seaman from Ken Wheldon the Birmingham City chairman, who he completely bamboozled into a brilliant deal for QPR, all done in less than 5 minutes over the phone. 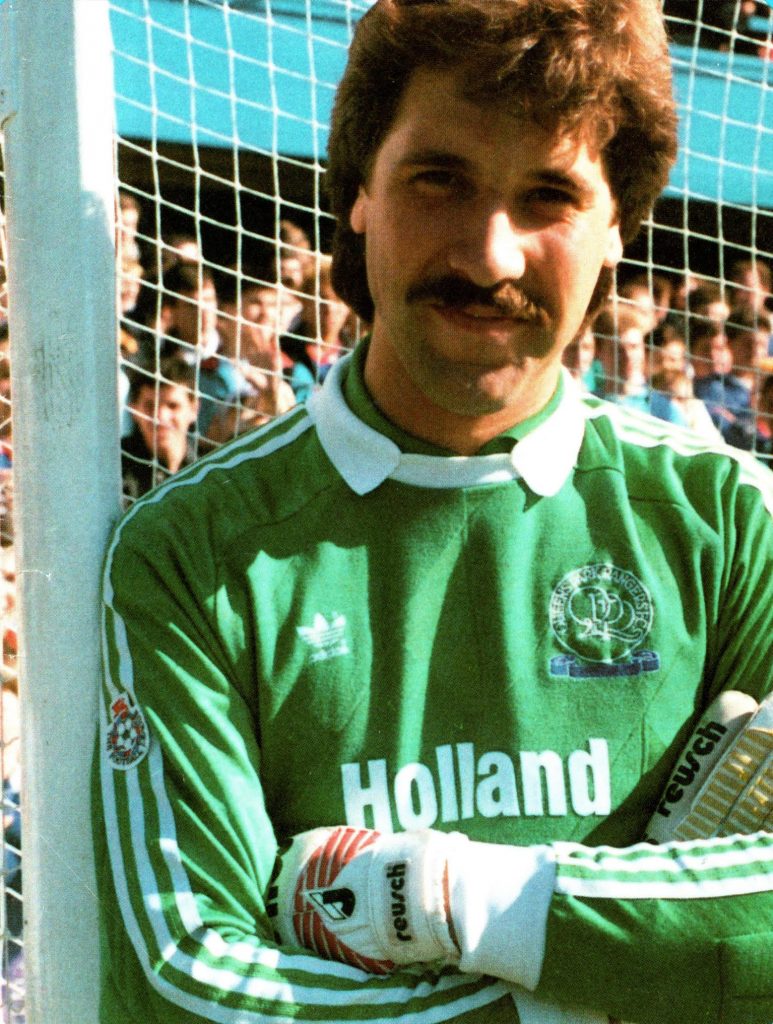 Jim was an endless source of stories, like the occasion shortly after Frank McLintock had arrived at the club when Jim bet an incredulous Frank that he could beat him over a distance of 50 yards with a yard start.

Frank willingly accepted the bet of ¬£100 until Jim led them all round the back of the hotel where they were staying in Blackpool, into an alleyway about 3 feet wide. Jim took his one one-yard start and trotted off knowing that Frank dare not try to overtake and knock his Chairman over. Jim strolled the 50 yards and put his hand out for Frank’s ¬£100.

His story of how he got his first car lot on the “Golden Mile” at Sunbury, just by putting deposits on cars without buying them was priceless too. He used to have a pocketful of old pennies, wait outside the Surrey Comet newspaper office and bribe the first driver out in the morning with the newspapers with 2s 6d to give him a copy.

Then he would take himself to the nearest telephone box and at a reasonable time ring ten likely sellers and arrange to view the cars over the next day or so. He would put a deposit of ¬£30-¬£40 on each car and then do nothing. When the sellers had real purchasers he would “sell” the deposit back to them for another ¬£5-¬£10 and go on doing this until he had made his first ¬£1,000!

(I’d like to thank Barry for a very entertaining and highly informative first part of the interview and also thank my cousin Julie Robinson for first introducing us. In part two of the interview, to follow on soon, Barry shares some more Jim Gregory stories as well as his views on some other QPR owners of the 1980s and 1990s, the real story behind the Martin Allen’s baby/Trevor Francis incident and the details of how the KLM sponsorship came to an end). 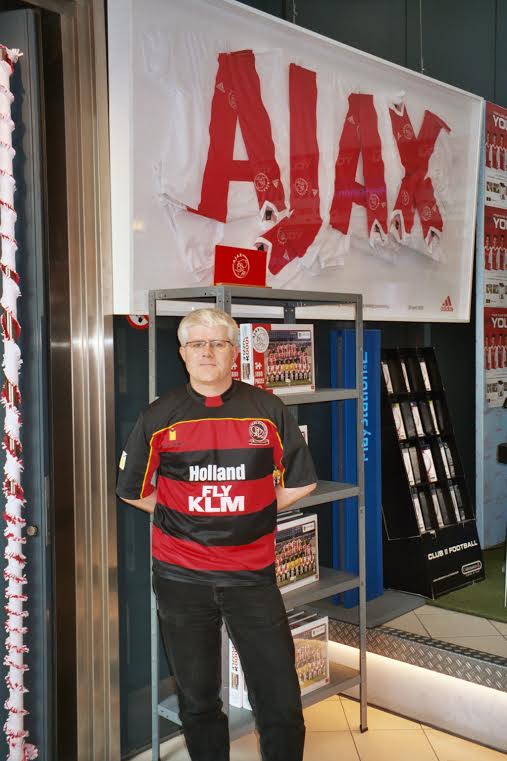 (Martin Percival at the Ajax Museum in July 2004)