Taddy & Co. produced three sets of cards in their Prominent Footballer series: 1907, 1908 and finally 1913. The first series has already been featured and this particular card is from the second series that was issued in 1908. 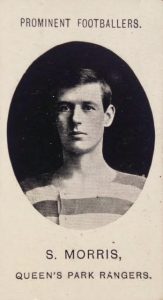 Samuel Morris was born in Handsworth on 23rd October 1886 and his first club was Aston Villa. He signed for QPR in 1908 and made his debut at Southampton on 25th April.

Morris went on to make 42 Southern League and FA Cup appearances and scored two goals. He then moved on to Birmingham in 1911 and his next club was Bristol Rovers.

During the War, Morris served with the 17th (Service) Battalion of the Duke of Cambridge’s Own (Middlesex Regiment).

Morris signed for Brentford in 1919 and two years later he joined non-league side Maidstone United.