On 3rd August 1971, the R’s were set to take on Leicester City at Loftus Road but the match was postponed. This led to a stronger QPR side being selected to take on Enfield.

There were possibly ten changes made according to the programme line-up, which incidentally, was listed as follows: Spratley, Delve, Seary, Sibley, Watson, McGovern, Everest, Mayes, Abbott, Morgan (I), Ferguson. 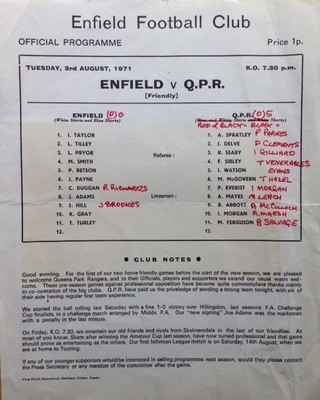 The following match report later appeared in the local press:

‘Rodney Marsh and company came to Enfield on Tuesday night and for 45 minutes got the shock of their lives as Enfield held them to a goal-less draw at half-time.

This was intended as a run-out for the Queen’s Park Rangers reserves but the entire first team were drafted in instead when their match against Leicester was scrapped because of ground conditions.

As has happened so often in the past, the Enfield amateurs gave the professionals as good as they got in a humdinger of a first-half. The best of the action was, to the astonishment of the Stadium fans, in the QPR penalty area. The fabled Marsh was contained – and didn’t like it one bit.

After the interval – and, no doubt, a tactical talk in which Enfield’s weaknesses were pointed out – the rout began.

Enfield, who had succeeded with direct, simple football in the first-half, were now a little over-confident and tried some fancy stuff in defence instead of getting the ball away.

They were punished unmercifully – and Marsh began to show why there is a ¬£180,000 price tag on him.

The fact must be faced that had Enfield had Andy Williams in goal and Brian Moffat at left-back, QPR would probably have been held to a couple of goals, which would have been a much fairer reflection of their superiority.

But deputies Ian Taylor and Len Pryor were not the only ones to present QPR with gift goals. Defenders with a great deal more skill and experience were just as guilty.

QPR’s first goal was a prime example. Tilley and Betson fiddled instead of clearing promptly and Marsh pounced, weaving in from the left to slot the ball immaculately between Taylor and the near post.

Then Marsh slipped the ball through for McGovern to crack it home off the far post. Number 3 came when Marsh took a lightning free kick when the Enfield defence were unready and Hazell slammed it in.

A minute later Pryor miskicked and presented Marsh with the easiest chance of the match. Finally, as Enfield again failed to clear, Evans poked the ball through the ruck with Taylor committed the wrong way.

Despite the flood of goals, Enfield were by no means out of the game. They continued to threaten the QPR goal and Adams and Payne particularly, forced keeper Parkes to pull off spectacular saves.

New signing John Geddes, who came on for the second-half, also had a couple of impressive attempts. Enfield may not have scored but Parkes knew he had been in a game.’

Four days earlier, the R’s had begun their pre-season campaign with a 2-1 win at Swansea City.