Chris Hewitt and I met up with Sammy outside Park Royal Station for the trip to Leighton Town on Saturday.

After we had parked up the first thing I noticed was the ‘Bircham & Sons – Plumbers’ van and on display at the top of the windscreen was a mini QPR scarf. Lee Bircham ismanager of the Spartan South Midlands League side

Formed in 1885, this was my first visit to Bell Close and the ground consists of a small stand on one side and a covered area behind one of the goals. 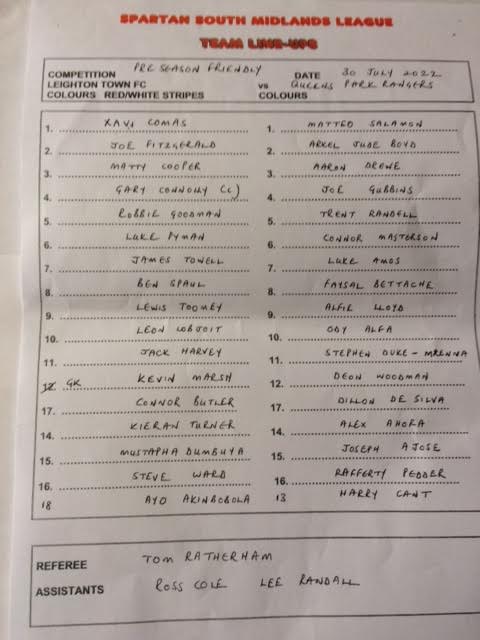 Luke Amos was in the starting line-up, and the match kicked off five minutes or so late.

Despite the R’s having most of the early possession It was the Reds who took the lead after 12 minutes. Matty Cooper seized upon a loose ball in the box and his strike hit the back of the net via the inside of the upright.

Rangers’ first effort of the afternoon was provided by Alfie Lloyd, but his shot went wide of the post.

Lewis Toomey, lurking in acres of space in front of goal, really should have made it 2-0 for the home side.

Stephen Duke-McKenna did get his shot on target, but he directed it straight at Xavi Comas, which was followed by Arkell Jude-Boyd’s effort being smothered by the Reds keeper.

Leighton had another good opportunity to increase their lead when Matteo Salamon gave the ball away which resulted in Toomey heading the ball well over the crossbar.

Rangers managed to draw level just before the break when Duke-Mckenna was clearly fouled in the box. Mr Ratherhamhad no hesitation in pointing to the spot and the R’s No.11 placed his shot low to the keeper’s right. Half-time: 1-1.

Dillon De Silva and Alex Aoraha were introduced for the start of the second-half at the expense of Luke Amos and Ody Alfa respectively.

The away side started the half very much on the front foot with better movement and passing the ball about much quicker.

Faysal Bettache cut across central midfield to set up Stephen Duke-McKenna who went on to strike the ball just past the far post. Then, Aaron Drewe’s powerful shot was palmed over the bar for a corner.

The R’s scored what was to be the winner in the 65th minute.Dillon De Silva’s excellent low cross from the left-wing was met at close range by fellow substitute, Alex Aoraha.

At the final whistle, Aaron Drewe called over to a group standing near me for the Blackburn result, which had finished shortly earlier.

Lee said after the game: “We had a great first-half. We probably should’ve come in (at half-time) 2-0. Second-half, we tired obviously and they’re a real good side popping it around. But we still created chances.”

Thanks to Sammy for the lift.