‘Dave Sexton, the man who has moulded the QPR dream machine, still refuses to accept that his side are as good as First Division champions.

Rampant Rangers, with 23 points from the last 24, wrecked the Middlesbrough mean machine with a second-half performance that was devastating.

Yet Sexton is still being cautious: “I think the race for the title will still go right to the end of the season,” he said. “We’ve just got to keep on winning, and that way nobody can catch us.” 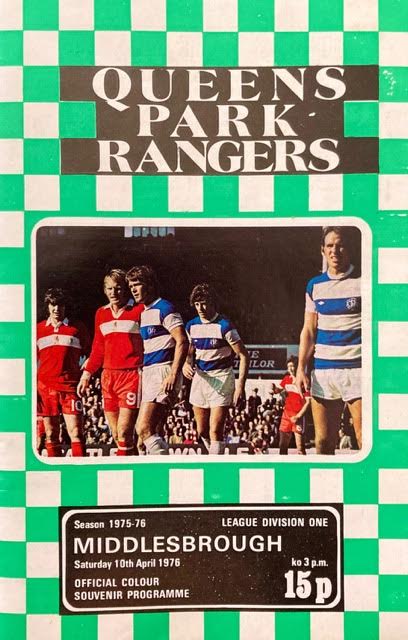 Those frenzied home fans who jeered referee Jack Taylor throughout the first-half, as Rangers struggled to find their rhythm, had to thank the World Cup official for putting their side on the way to this sensational victory.

It looked like being a tale of woe for Rangers when Boersma took advantage of a fumble by Phil Parkes to put so-defensive Middlesbrough into a 53rd minute lead.

But it was short-lived – thanks to Mr Taylor who awarded Rangers the most doubtful penalty of the season, six minutes later. Right-back Dave Clement raced into the penalty area, Maddren made it to tackle him, and Clement took off like Concorde.

Harold Shepherdson, in charge of the Middlesbrough side in Jackie Charlton’s absence said: “It was a complete dive.” Sexton, not surprisingly, begged to differ: “I was sure it was a foul, although I think Dave made it more dramatic than it really was – bless him!”

Francis made no mistake from the penalty spot and from the moment Rangers were level they began to show their championship style.

Givens hit a superb second goal in 65 minutes, Francis made it 3-1 ten minutes from time from a magnificent “assist” from Stan Bowles.

Four minutes from the end, Bowles capped a tremendous Rangers transformation with a superb fourth goal.

In the final minute, Peter Brine pushed home a consolation goal for Middlesbrough and Sexton said: “My lads were really annoyed about it. It’s so tight at the top that goal average could decide the title. My players were really mad at losing that late one.”

That was the only moment in the match when Dave Webb wasn’t on the spot to take Rangers out of trouble. He had a superb afternoon while some of his more illustrious team-mates struggled to find their form.

Fortunately for Rangers Don Masson kept a cool head all through, or they might well have been in trouble.

Man of the Match: David Webb.’

The 2-3 defeat at Carrow Road the following week was to cost Rangers the title!