The following article (edited), appeared in a 1970’s Football Annual:

‘Something happened to me during the season 1972-3. I do not expect that I was the first player to appear for both of the clubs that won promotion from the Second to the First Division during their promotion season but, on the other hand there cannot have been many players to have done it before me.

And come to think of it – if the idea of three-up and three-down between the top three divisions (introduced for the first-time last season) becomes established, it may be that I will have been the last player to play for all the promoted clubs from the same division in a season. It is difficult, that is to say, to imagine a player playing for all three of them!

At the end of the season, Burnley were top with 62 points and Queen’s Park Rangers second with 61 – I hope that the four goals I scored for Burnley and the six I scored for QPR helped both of them to reach the First Division.

It is one thing to reach the First Division – to have gained promotion; it is usually a much harder task to remain there or, at least, to avoid a first season of constant struggle against the threat of relegation. 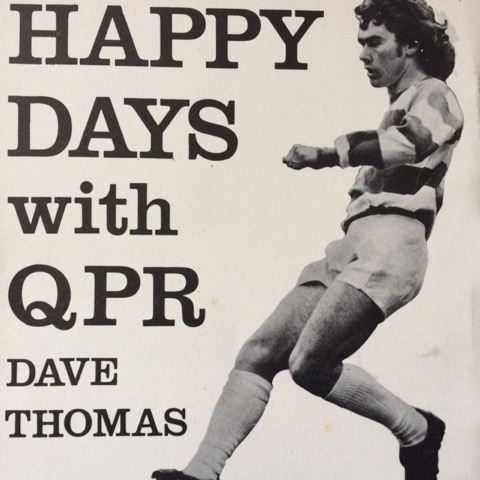 Burnley had finished the 1971-2 season in 7th place. Queen’s Park Rangers had finished 4th, but when the season ended QPR was just a name to me like that of any other club. I had no way of knowing that not long after the new season started I would be moving south.

I had been for a while a little unsettled at Turf Moor. The years of growing up with the club as a junior – something like serving an apprenticeship – were dropping further and further behind me.

I, and those I had first been with at Turf Moor, on and off the pitch – had served my time. The chance came along. Burnley and Queen’s Park Rangers had agreed a fee for the transfer of my registration. The choice was now mine.

Born in the Midlands, bred in the North-East, football apprenticeship served in Lancashire…how would I fare in the ‘bright lights’ of London? There had been several players who had not settled when they moved South but there had been an equal number at least who had!

I moved and have never regretted my move. I did not move to the ‘bright lights’ – I moved to a club that was on the up-grade; a club preparing to get back into the First Division and to stay there.

A happy club with a good blend of players who had come through their junior ranks – players like Mick Leach, who had been with them during their early brief appearance in the First Division, Dave Clement, Ian Gillard and Gerry Francis; experienced players like Terry Venables and Terry Mancini; young players signed from other clubs like Phil Parkes, Don Givens, Stan Bowles, and, myself.

As I mentioned at the beginning of this article, I joined them with the season almost one-third played – I actually signed on 19 October 1972, and I was happy to play in 28 of the remaining matches as QPR gained promotion.

Before the new season started the experienced strength gained from the arrival of Frank McLintock from Arsenal.

Who would have expected that while Arsenal struggled a bit through a frustrating season, Frank would have been playing a prominent part in a success story for Queen’s Park Rangers?

I don’t think that anyone can point to a single factor that will make the difference between success and failure in football. Never a season passes without evidence of the way in which, for example, the addition of an expensively signed new player fails to have the improving effect that was expected.

He was a good player, he is still a good player, but his acquisition may not do much to improve the play of the team. It might even, if other players tend to play too much for him, reduce their effectiveness as a team.

It is possibly only a thin line between success and failure. What is pretty certain is that when a team is playing well, barring accidents, they are likely to continue to improve. Success brings confidence and keenness.

Players cease to worry and have those fatal doubts on the field, to try to hide themselves in case they make a mistake,

And at Loftus Road last season we soon came to realise that we had nothing to fear from any side in the First Division.

It was a happy season for all of us and there was plenty of evidence that our play was being observed by Sir Alf Ramsey.

I had been young – only eighteen – when I made my first U23 appearance, so I was still in the age-group for selection, but my run of appearances had been broken during the promotion season.

Then, last season I was delighted to find myself again picked for the squad and to reappear against the young Danes at Fratton Park.

I was also picked, along with my club-mate Gerry Francis, for the match against Wales but we had to withdraw because QPR had a FA Cup replay against Chelsea.

The clash of interests between club and country does often upset a player’s opportunities to play in anything but full international matches – and sometimes it even reduces these since Sir Alf Ramsey is reluctant to play anyone who has but a couple of days before played in a hard club match.

What remains encouraging however, is to be selected – to know that you, and your play of course, has not been forgotten or thought lacking. To be noticed is an honour in itself.

More than that it is a spur to a player to continue plugging away and constantly seeking to improve his game.