The earliest newspaper reference Colin has unearthed so far appeared in the West London Observer on 27th August 1926:

‘In this, only his second season in County cricket, M. Nichols, the young Essex bowler, has taken 100 wickets.

Last season he took 52 wickets for 24.3 runs each, so that he can look back with pride on his first two seasons in County cricket.

A native of Chelmsford, Nichols is a right-hand fast-medium bowler and a sound left-hand batsman. He is also a good goalkeeper and will play as an amateur for Queen’s Park Rangers during this coming season.’

Unfortunately, there is no record in the relevant Club Handbook of the number of appearances he made for the Rangers that season. However, Colin did unearth a short report in the West London Observer, dated 7th January 1927:

‘Rangers reserves were beaten at Watford by 6-0. Rae scored for the home club in the first-half, after George Russell had hit the bar.

His QPR career must have been brief as this article dated 29th July 1927 bears out:

‘Nichols, the Essex fast bowler was unable to play for the Rest against England at Bristol owing to an injured arm.

Although he turned out for his County against Leicestershire on Saturday, he was not able to take his usual share of the bowling.

Nichols assisted Queen’s Park Rangers as an amateur last winter but does not intend playing football during the coming season. He will be engaged on the staff of Pat Hendren’s cricket coaching school in the absence of the Middlesex cricketer in Australia.’

On 18th June 1935, the Leeds Mercury proclaimed: ‘Nichols The Test Match Hero’ and went on to report: ‘A fine bowling performance by Morris Nichols, the Essex fast bowler, who took six wickets for 35 runs, put England in a strong position in the First Test Match against the South Africans at Nottingham yesterday.

The South Africans, with nine wickets in hand, require 147 runs to save an innings defeat.’

Looking at the England scorecard and batting at number eight, he was 13 not out when the declaration was made.

Playing for Essex against Yorkshire in July 1935, Morris was involved in an unusual incident: Yorkshire had declared on the final morning after adding just two runs to their overnight score, which meant that Essex were set a target of 332 to win.

Abhishek Mukherjee wrote the following fascinating account of what followed:

‘Bowes got Jim Cutmore for a duck, but Roy Sheffield and Stan Nichols took the score to 39 for 1. Then Bowes got Sheffield caught by Maurice Leyland, Jack O’Connor was run out for 2, and captain Tom Pearce fell for a duck. Essex slumped to 41 for 4 in the blink of an eye.

Charlie Bray was next. Meanwhile, Bowes had finished his over, and Verity commenced bowling from the other end. Nichols, in counter-attacking mood, lofted him for six, for was offence not the best defence. What better way is there to release pressure than to hit a six?

Unfortunately, in the frenzy of the collapse, no one had noticed that Bray had not yet arrived at the crease. It was a ridiculous oversight by the fielders, but for the umpires it was near-unpardonable. How could they miss it?

Further confusion awaited the umpires when Bray arrived: what do they do about the six runs? Should Nichols get the runs, or should they be expunged? The umpires decided in favour of the latter.

Nichols was obviously unhappy at this new turn of events. It was never easy to hit Verity for six and it was obviously annoying to being stripped of the feat and six runs. He was trapped leg-before next ball.’ 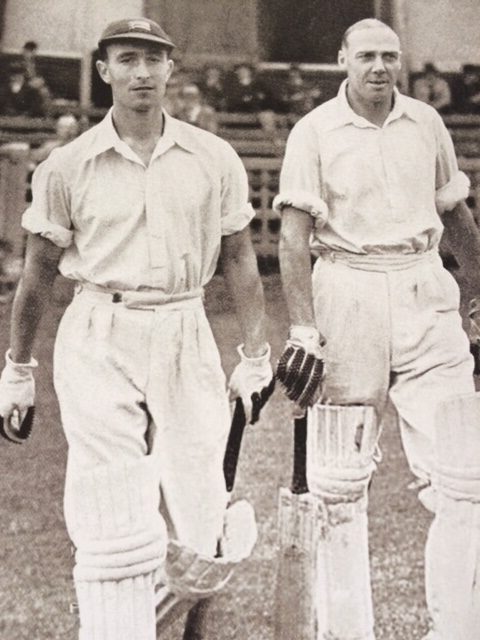 At the outbreak of WW2, Morris enlisted as an Air-Raid Warden. Later he was a P.T. instructor in the Army.

‘M. S. Nichols, the former England and Essex all-rounder, has died at his home in Newark, Nottinghamshire, at the age of 60.

He played 14 times for England between 1929 and 1939 and, in his career with Essex, achieved the cricketer’s double of 1,000 runs and 100 wickets eight times. And took more than 100 wickets in a season on eleven occasions.

Mr Nichols was born in Stondon Massey, Essex, and joined the County in 1924 as a left-handed batsman. He was also a competent right-arm fast bowler and became the first Essex professional to do the “double”.

Nichols, in his footballing days, was a useful goalkeeper and played for Queen’s Park Rangers.

After retiring from first-class cricket after the Second World War he played for Aston Unity in the Birmingham League.’

(Thanks to Colin Woodley for his extensive research in The newspaper archive. The above photo is from my collection & shows Morris & Denis Compton walking out to bat)