Not to be confused with the Packhorse & Talbot further down the road, the Old Packhorse is situated on the corner of Acton Lane and Chiswick High Road. The former was actually called ‘The Packhorse’ until 1811.

On a very hot Sunday afternoon recently, I popped in there with my son for some refreshment.

The pub was licensed by at least 1747 as the West Country Packhorse. It then became the Lower Packhorse in 1790 before reverting to its current name in 1811.

In its earliest days it was said to: ‘have featured as an assembly room which played host to evening balls and other entertainment.’ 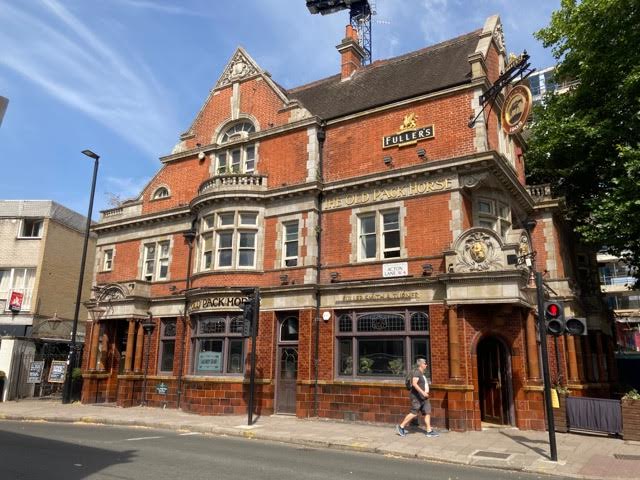 Poet and writer Horace Walpole used to bait his horse there on his way to Twickenham. And it must be mentioned that Tommy Cooper was a regular for many years. Tommy had lived in near-by Barrowgate Road.

Re-built in 1910, the current structure was designed by T. H. Nowell Parr for Fuller, Smith & Turner and is Grade-11 listed. The building historian Nicholas Pevsner wrote that: “it has plenty of jolly terracotta detail and bowed ground-floor windows.”

Also, this from the pub website: ‘Many moons ago the bar was frequented by Irish navies who would meet here and give out pay to their teams in big rolls of cash and that’s how our bookable bar area became known as the “Millionaire’s Bar.”

A flat-roofed extension was added in the early 2000’s, to a dining area, which by all accounts, serves reputable Thai food.

Is the pub haunted? I was told that it was quite common to see glasses move across the table by themselves and drop on the floor. This, she said, had been witnessed by various members of staff over a number of years.

I will be back…

(The above photo was taken by Louis Russell)