QPR legend Peter Angell sadly passed away on this day in 1979. As a way of remembering him I’ve reproduced an article that he wrote for ‘Charles Buchan’s Football Monthly’ in February 1960:

‘They said that Soccer is devoid of sentiment. But it was a typical goodwill gesture on the part of that gentleman of Soccer, Charlton Athletic manager, Mr Jimmy Seed, at the end of the 1952-53 season, that led to my joining Queen’s Park Rangers.

I had been playing on the left-wing for Slough Town, in the Corinthian League, and was invited to appear in a few trial games at the Valley, in the London Mid-Week League.

Mr Seed then asked me if I would like to start pre-season training with the Charlton players the following August. It seemed likely that I would be signed on professional forms.

But in the meantime, Mr Jack Taylor, the Queen’s Park Rangers manager, had shown a lot of interest in me and, when Mr Seed learned that the Rangers were so hard up for players, he suggested that Mr Taylor might like to offer me terms.

So, when Rangers’ chief came to see me I signed as a professional at Loftus Road in June 1953. I immediately gained a first-team place.

I once had the chance of becoming a part-time professional with Rhyl, in the Cheshire League, but I turned it down because I wanted to return to Slough, my home town – I was serving in the Army at Rhyl.

In Slough I began to play football with the Ragstone Road School, as a left-winger. But there was little opportunity for much match experience then because the War was on.

After the War I joined Chalvey Village FC, in the Slough and District League. I was then 15. I had three seasons with Chalvey and then went to Slough Town. While there I was selected for the Berks and Bucks County FA team, at outside-left.

I had always considered myself as a left-winger, but when I got into the Army, my general football experience enabled me to operate at left-half, and I soon realised that here was my true position.

At Rhyl, I received a lot of coaching and common-sense advice on the functions of the wing-half from Tommy McKillop, the former Glasgow Rangers wing-half, who looked after the Rhyl FC players.

After arriving at Loftus Road, I made my League debut against Walsall – on the left-wing. I was also tried out at centre-forward in those early games for the Rangers, but it didn’t take the management long to realise that left-half was my most effective position. So after only six outings I was switched.

This is my seventh full season with the Rangers and in that time, I must have played well over 250 league and cup games for the West London club.

I have managed to score an occasional goal and, in one game that stands out for me – against Leyton Orient at Brisbane Road – I scored a valuable equaliser with only two minutes left.

I got a real kick out of saving that bonus point for the lads. That match was in the old Third Division South. Since the formation of the new Third and Fourth Divisions I have noticed a greatly improved standard of play. Everyone seems to be trying to play football now; the old biff-and-bash stuff has largely disappeared.

Talking about my modest goalscoring feats, like all wing-halves, I always enjoy getting among the goals, and since I have taken over the ‘penalty king’ role at Shepherd’s Bush, I have been able to supplement the usual tally.

In fact, last season I was second highest club scorer with nine goals, three of which were penalties. This season I netted twice in the game against Wrexham, and I’m hoping to get a few more before the winter is through.

I have my own idea of how penalty kicks should be taken. Some players like to place their shots, or roll ‘em in. Others specialise in getting the goalkeeper going the wrong way. 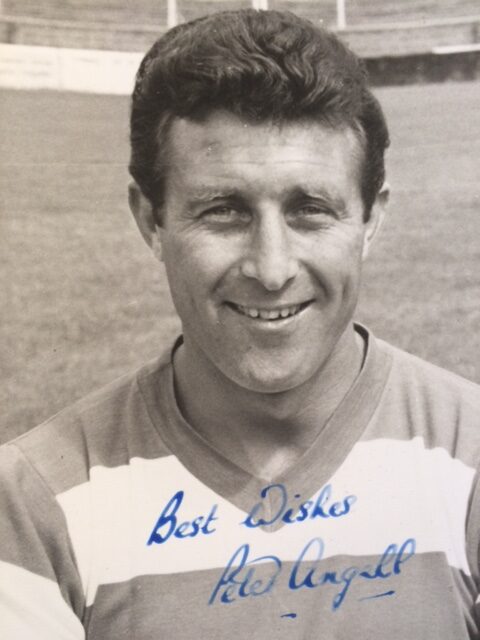 I rely on pace to beat the goalkeeper and, as I have missed only two of my last eight spot kicks, I am sticking to my theory for the time being. My first miss was against Newport County when I shot within easy reach of the goalkeeper.

This season I am proud to belong to the finest Queen’s Park Rangers team I’ve played in since joining the club.

It is a great treat to play in such a powerful and confident defence, knowing that if I am drawn out of position either left-back Tony Ingham, or centre-half Keith Rutter, will be ably covering up any gaps.

And it is great to know that if Tony and Keith are beaten, then there is often England amateur Mike Pinner in goal – a player who wouldn’t disgrace the full England team!

I think I would like to stay in the game when my playing days are over. I don’t believe in leaving everything to chance and would prefer to guarantee my future in some way.

Having said that, I must point out that I don’t agree with young professional footballers having too many outside interests while they are still in the game.

They should be concentrating solely on improving their play – for the first few years – and think about an outside business only when they are firmly established as league players.

Quite often, worries about his outside job affect a player’s form considerably. As I see it, there is no sense in taking on too much responsibility too soon.’

One thought on “Remembering Peter Angell – “After Arriving at Loftus Road, I made my League Debut against Walsall – on the Left-Wing””