I met up with Sammy at Park Royal and we then headed off to Victoria Station. Later, I bumped into Ray Marno at Crawley Railway Station and we decided to take the 20-minute walk to the Broadfield Stadium.

As the Rangers support began to build-up, it soon became the usual social occasion.

Twenty-two players were used, and it was also interesting to take note of the absentees. Apparently Seny Dieng and Luke Amos were nursing minor knocks.

On a very hot afternoon, it was the R’s who took an early lead when Sam Field rose up to head home Stefan Johansen’s corner.

Albert Adomah blazed the ball over the crossbar and further goalscoring attempts were made by Kenneth Paal and George Thomas respectively.

As for the home side, not only did they fail to trouble Joe Walsh, they hardly got into the Rangers half during the first 30 minutes or so! Half-time: 1-0. 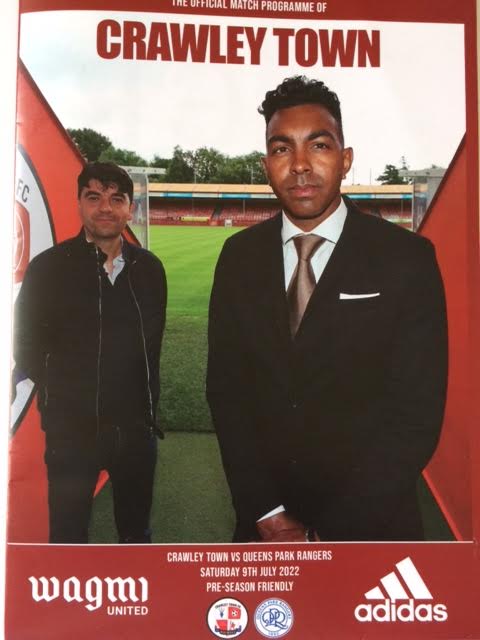 As expected, Mick Beale made wholesale changes for the second-half. Tyler Roberts had played behind Lyndon Dykes before the break and it was good to see Charlie Kelmanpartner Macauley Bonne up-front.

The away side soon doubled their lead and what a goal it was!After Bonne had challenged the Crawley substitute goalkeeper, Corey Addai, in the corner of the penalty area, the R’s striker twisted round and floated the ball magnificently into an empty net!

Olamide Shodipo’s run down the right-wing resulted in a great cross into the box which was met superbly first time by Macauley Bonne.

However, despite the away side’s dominance, the Reds scored two quick goals, commencing with James Tilley’s strike from the edge of the box on 65 minutes.

This was followed four minutes later by Conor Masterson giving away a penalty. Tom Nichols made no mistake with his spot-kick.

The home side forced an equaliser on 82 minutes. AramideOteh’s initial effort was saved by Murphy Mahoney, but Manny Adebowale followed up and found the bottom corner from around 12 yards.

The QPR head coach said after the match  “But it was the first game and as long as we learn from it and become better and stronger. We know we are nowhere near the finished product.”

The following day the team set off for Germany.