After R’s fan Lance Hockley had informed me on Facebook that Harry Daniels was his wife’s uncle, with Colin Woodley’s assistance, I began to research his career.

Harry was born in North Kensington on 25th June 1920 and probably grew up at 32, Manchester Road, London W10. A lost street which is now buried underneath a roundabout.

By 1939, Harry had moved to Flat E7, Sutton Way, also in North Kensington.

The Daily Mirror reported on the 8th April 1940 that: ‘In response to manager Vizard’s appeal for local juniors, Harry Daniels called at Queen’s Park Rangers’ ground and asked for a trial.

That was a week ago. On Wednesday, Harry makes his first appearance in big football as Rangers’ inside-left against Aldershot. Note to other unknowns…see where it gets you when you dare to be a Daniels.’

Rangers had signed him from local club, Kensington Sportsand on 10th April 1940, Harry played in the League South ‘D’ game at Aldershot. He then went on to make his 1st team debut later that year on 21st September against Charlton Athletic.

Sometime after playing in the 3-3 draw at Vicarage Road on 24th May 1941, Harry joined the Royal Artillery.

John Marks records in his book, ‘Heroes in Hoops’, that Harry represented the Regiment during the War years and that he was wounded during the North African campaign. 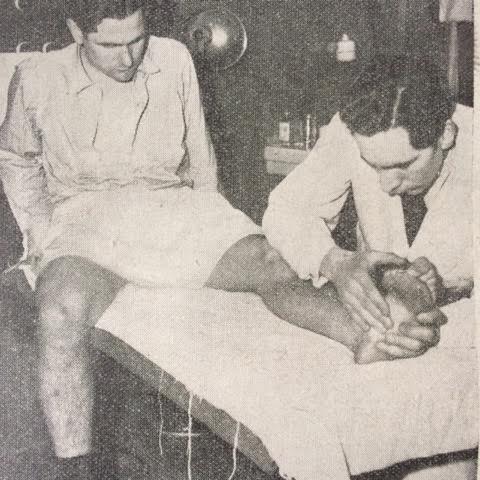 Upon Harry’s return to Loftus Road, his next league match for the R’s was at Aldershot on 11th November 1944.

Two weeks later the QPR match programme recorded that: ‘At Aldershot we played two of our youngsters, Harry Daniels signed as a pro a few weeks ago.’

And the following month the match programme v Palace reported on the 7-1 win over Luton: ‘Young Harry Daniels engineered some fine raids and it was fitting that he should get his name in the honours by scoring two goals in his first home match in the league.’

In 1948, after making over 100 appearances and scoring 13 goals, Harry moved to Yeovil in the first week of August. However, within days it was reported that he had asked to be released from his contract after Brighton had shown interest in him.

The Yeovil chairman said: “We regard Daniels as our player. The next move lies with Brighton and if they wish to make an offer for the player we will give the matter consideration.” Harry went on to sign for the Seagulls for a fee of £2,000.

Harry later played for York City and Dover. In early August 1954, He became Lancing’s new player-coach, but by November he was granted a move to APV (Crawley) Athletic.

Lance told me that Harry was a P.E. teacher at Christopher Wren School and that the three brothers had a Bookies in All Saints Road in Notting Hill for a while.

Harry sadly passed away in October 2002, aged 82 and Lance informed me that he was: ‘A Gentleman till the End.’

(My thanks to Lance Hockley & Colin Woodley for their assistance. Source of reference: John Marks’ ‘Heroes in Hoops’ & Gordon Macey’s – ‘Queen’s Park Rangers – A Complete Record’ – Rest in Peace Gordon)