For the first pre-season match, and a new ground, I met up with my mate and Swedish R, Simon Staal, at Rayners Lane before linking up with Sammy at Hanger Lane Station.

After arriving nice and early at the ground, we headed to their Club House to meet up with some of the others.

As the game got underway, it was the away side who enjoyed most of the early possession, but it was Raynes Park Vale who scored the opening goal from their first real attack.

After Rangers had given the ball away, Trent Mahorn was adjudged to have committed a foul in the box.

At this point the home side picked up their game, but it was QPR who fashioned a couple of attempts at goal. The first one was hit low and comfortably held, which was then followed by Trent Mahorn’s hopeful long-range strike that cleared the crossbar.

Trent Mahorn received a booking and later, the Vale No.11 was also shown a yellow card.

Two Vale attempts evaded the upright and at half-time it remained 1-0 to the home side. 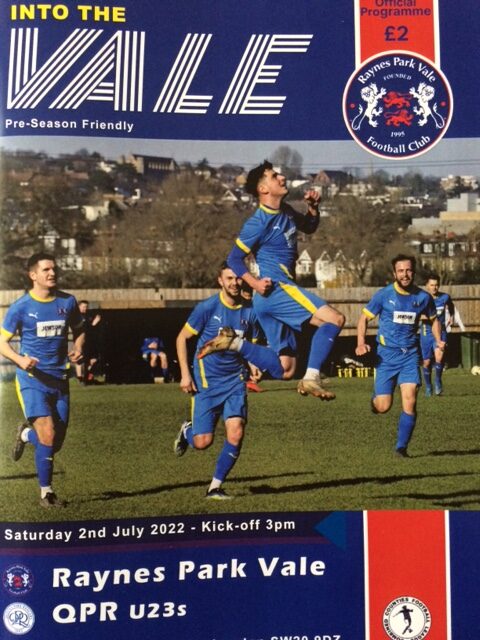 For the start of the 2nd half, Andy Impey brought on Matteo Salamon to replace Harry Halwax in goal.

It wasn’t long before the R’s equalised after Alex Aoraha was brought down in the box. Ody Alfa made no mistake beating the Vale keeper.

The home side went very close to re-taking the lead after having two shots blocked. Then a poor defensive header was seized upon, but the R’s keeper was able to make a comfortable save.

The Vale No.11 broke away down the right-wing which got him into the box but he ended up shooting wide of the upright.

On 65 minutes, Harry Hawkins and Micah Anthony were brought on to replace Deon Woodman and Harry Murphy respectively.

Stan Flaherty gave the R’s the lead when he just managed to connect his boot to a high ball with the keeper in close proximity.

However, the home side soon equalised. Charlie Penny’s 25-yard free kick left Matteo Salamon rooted to the spot after going through the Rangers wall.

Matteo Salamon was forced into making an excellent flying save and he then did really well to push the ball behind for a corner after the Vale No.7 had broken away.

Andy Impey’s final change had seen the introduction of Matthew Castillo at the expense of Alex Aoraha.

The match finished all-square and I think that overall it was a fair result.

Raynes Park Vale FC had been formed in 1995 following the merger of Raynes Park and Malden Vale.

Good to meet the chairman, John Dalton, and well done to the Club for issuing a decent match programme.

News filtered through that the 1st team had defeated an Uxbridge side at the training ground.