He played for Willenhall Town early in his career and Frank was also an amateur with Wolverhampton Wanderers at some point.

Frank joined Shrewsbury Town in 1961 where he went on to make 218 appearances and score 89 goals, in all competitions.

He signed for the Rangers in February 1968 for a reported fee of £35,000 and made his league debut later that month at Bolton on the 24th. 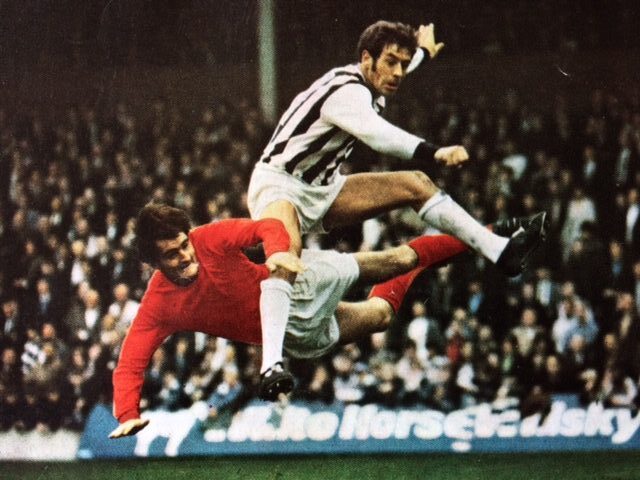 ‘He comes from an amazing family. There are five sons, all brought up in a grey brick semi-detached at Short Heath on the outskirts of Wolverhampton.

Besides Frank and Alan there is Derek, who was transferred from Walsall to Wolves and Kelvin (12) and Wayne (8). Already Kelvin has been picked out as a star of the future. Frank thinks he’ll be the best player the family has yet produced.

What is the secret of the Clarke family? Frank says: “Basically I think it was because we had the best recreation ground right opposite the front door. We were always playing football, right from the moment I can remember.”

“Football mad, that’s all we used to do. We used to take our dinner in shifts. First Alan would come in and eat his, then he’d go out to play again and I’d come in.”

The Wolves were the first team to sign Frank, he joined them as an amateur but soon tired of the set-up: “I stopped going there because there were nine teams. I didn’t see much sense in it.”

So, he signed on for Shrewsbury Town as a professional, where he stayed for six years. He scored a lot of goals there, but the game he remembers most playing in is one he lost:

“It was at Chelsea in the Cup. Arthur Rowley played at Chelsea and scored, so did Peter Broadbent but they beat us 3-2.” Ironically among the scorers for Chelsea was Barry Bridges.

What has it been like to live in the shadow of a famous younger brother? “A lot of people used to take the mickey out of me saying he got all the publicity. I’m not jealous at all. I think it could have been the other way round. I’m really, really pleased for Alan. We’re very close.”

In fact, the Clarke’s are a very closely contained family. Mr & Mrs Clarke senior spend all their spare time travelling to watch their various sons play. Mrs Clarke will be able to see all QPR’s games in September because she is coming down from Short Heath to spend the month at Frank’s Chessington home.

Mr Clarke told me he thought Frank should get more among the goals this season: “It’s the ones who score, that matter most,” he said with uncomplicated logic.

Frank feels the same. I said that I felt he had been over-generous in the past season or so, laying the ball off for team mates to score.

In the promotion year from the Second Division he took a lot of the physical weight off the shoulders of Rodney Marsh. He says: “I’ll try to score more myself this season. I’m definitely going more for goal. I think I’ve sharpened up a lot as well.”

“I feel well in myself. I’ll be trying to get 20 goals. There are times when you have to lay the ball off otherwise you get killed. But I feel it in me to score this year. I remember the season I scored 35 goals for Shrewsbury.”

Off the field Frank has yet to go into business like some other Rangers players, but he hopes one day he and his brother Alan will combine to form a company.

Meanwhile one unusual interest he has outside football is…baking! “There’s nothing I like better than to clear the wife out of the kitchen and bake a good pie or cake!”

At the end of his playing career, Frank returned to Shrewsbury where he worked as a newsagent and he also spent 28 years as a supervisor at a Sports Centre.

One thought on “In Memory of Frank Clarke”