Joseph Wingrove was born in 1894 and grew up at 2, Mount Pleasant, North Hyde, Southall.

After leaving school he worked for a time as a general labourer and turned out for the H. G. Sanders & Sons football team.

Joseph spent one season with Uxbridge Town before movingto QPR during the 1912/13 season.

He made his first team debut in the penultimate game of that season at Plymouth on 23rd April. The Rangers full-back went on to make 15 appearances over the next two seasons. 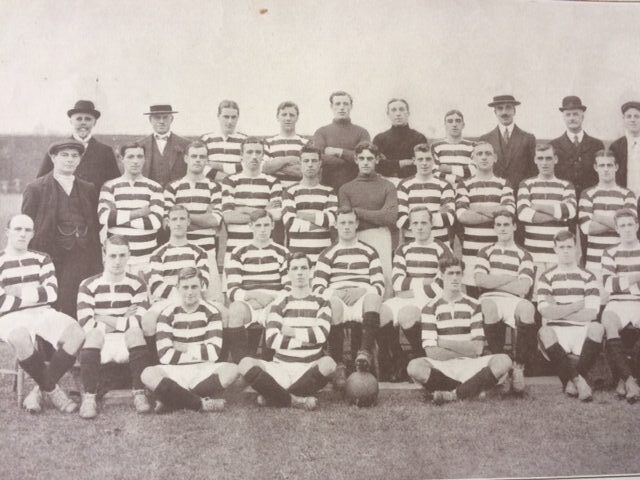 Following the 1-0 victory over Chelsea on 23rd October 1915, Joseph joined the Footballer’s Battalion in November. He later transferred to the 13th Middlesex Regiment (Duke of Cambridge’s Own).

In March 1918, he married school teacher Eveline Clements,in Uxbridge. The Uxbridge & West Drayton Gazette reported that: ‘The wedding was quiet, as the bridegroom arrived unexpectedly from the Front on a well-deserved leave.’

After the end of hostilities, Joseph’s next match was at Stamford Bridge on 21st December 1918. He went on to make a further ten appearances during that season.

For Rangers’ final spell in the Southern League Division One, Joseph made 34 league and cup appearances at left and right-back.

At the end of the season a new, regionalised Third Division of the Football League was formulated and all the Clubs from the Southern League Division One became members.

In his final 1920/21 season for the Rangers, Joseph made 24 league appearances and also two in the FA Cup, which included the famous 2-0 victory over Arsenal.

After making 88 league and cup appearances, Joseph joined Maidstone United in August 1921, but sadly after fainting at the end of a match on 12th December, he was advised not to continue playing.

In early March 1922, Joseph returned home to Southall. Then,after receiving medical advice, he was taken to St. Mary’s Hospital, but suffering from heart trouble, he sadly passed away on 16th March. Aged just 28, his death was four years to the day of his marriage to Evelyn!

Acting in relays, they took it in turns to carry the coffin for the half-mile walk from ‘The Jolly Gardeners’.

Amongst the floral tributes, were wreaths from Queen’s Park Rangers, (‘Deepest Sympathy from Officials & Old Comrades’) and Maidstone United, in their respective colours.

On 4th May 1922, Rangers played Maidstone at Loftus Road in a Benefit match for Joseph’s widow.

Joseph was the holder of the Royal Humane Society’s Certificate after rescuing a child from the Grand Junction Canal, which apparently was one of three rescues he had made from the canal.

(Thanks to Colin Woodley for his assistance. The above image of the 1913/14 Rangers squad is from my collection & comes from ‘The Daily Citizen’. Joseph is shown in the middle row, 5th from the left}