‘The Cornishman’ announced on 2nd March 1950 that the R’s were set to visit St. Just for an exhibition match. The game was scheduled for later that month on Monday 13th, kick-off 5pm, sharp.

Dave Mangnall promised to send a strong side to face the Saints and it was hoped that the Western National Omnibus Company would lay on extra buses from Penzance.

‘Good football from both sides was seen by a large crowd, when St. Just lost to the Second Division team last night.

The game will long be remembered for at least two things – the brilliant goalkeeping of St. Just’s, S. Chinner, who brought off excellent saves under pressure, and the splendid performance of team captain and centre-forward, S. Holman, who netted all three of his side’s goals.

St. Just gave their visitors a hard game, and there can be little doubt that at times the Rangers were fully extended.

The home team were the first to score, when in the 13th minute, Hughes sent through to Holman, who after a brilliant individual run scored from a difficult angle with a shot that left Allen, the Rangers keeper, sprawling.

Thirteen minutes later, after the Rangers had stormed the St. Just defence without result, Holman put St. Just further ahead after a neat passing movement, in which all the home forwards had a hand. 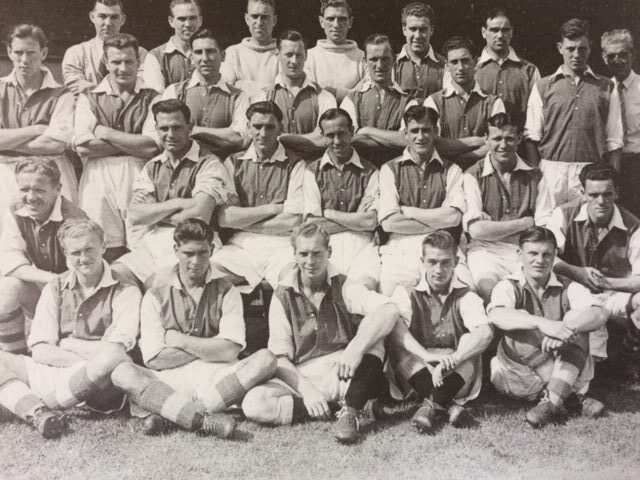 St. Just retained their two-goal lead until the interval, but on resumption Rangers took play to the home goal, where Chinner was called upon to make a number of saves.

After Wardle and McKay had wiped out the arrears, St. Just again broke away, and Hughes sent over a lovely pass to Nicholls. Holman met his centre and netted with a close-range shot.

After this, the St. Just defence was kept busy, and further goals came from Best (2), and Wardle.

‘The Cornishman’ reported that, ‘for the visitors, Wardle, Best and McKay shone in attack, especially Best, whose footwork was superb. Mills (left-half) also played a fine game, and kept his forwards well fed.’

After the game, the players and officials were scheduled to attend a dinner at the Commercial Hotel, to be followed by a dance in the Town Hall organised by the Saints’ Supporters Club.

QPR had agreed to give the players a bit of a break and a coach tour was arranged. The party left Loftus Road on 10th March at 11am for Torquay.

The team set-off on Saturday morning for Plymouth where they recorded a 2-0 win in a Division Two League fixture with goals from Bert Addinall and Tommy Best.

They returned to Torquay after the match. Then on Monday morning they travelled to St. Just and after the game they stayed one night in Penzance before returning to West London the following morning.