Brian Bedford, QPR FC goalscoring icon of the early 1960’s and one of my childhood heroes is no longer with us. Very sad news indeed.

It goes without saying that Brian was a prolific goal machine upfront for the R’s, mainly playing in the old inside-forward position.

When Alec Stock signed him from Bournemouth in 1959 he had already staked a claim to fame by featuring in that famous 1956/57 giant killing FA Cup run by the then 3rd Division (South) Bournemouth side when they eventually lost to Manchester United in the 6th round, having beaten Spurs and Wolves on the way.

Brian’s goalscoring record has of course been well documented over the past decades and I have so many happy memories of his various goal bonanzas at Loftus Road which are far too numerous to mention all of them here.

I will though put in print his fabulous hat-trick against Bury in a top-of-the table Division 3 clash at Loftus Road on the 28thJanuary 1961. What a game! Rangers were behind, but a late Brian Bedford blitz saw them of and the R’s went top. Schoolboy joy for me!

I am sure that if Brian had got to play in the higher grade of football he would have been just as devastating in the main striker’s role.

Brian’s main attribute was his great heading ability. He was a real danger in the air in the opposition’s box. Quite often when the R’s had a corner, the cry from the crowd was…’On Bed’s head!’.

He was absolutely fearless when it came to those type of encounters with opposing defenders.

On his departure from QPR FC in 1965, for a short while Brian played for both Scunthorpe United and Brentford.

In fact, he played against the R’s for Scunthorpe in a Division 3 midweek league match at Loftus Road on 4th October 1965, when Rangers won 1-0.

Needless to say, he had a great welcome from the halfway-line mob. But it was strange to see him playing in another team’s strip.

In addition to his obvious football talents, Brian was indeed something of an all-round sportsman. He was a Cricket coach at local West London schools during the close season and in his time, he was also a noted Badminton tutor.

Step into the Legends pages of QPR FC history Brian Bedford. Your name fully deserves to be there. 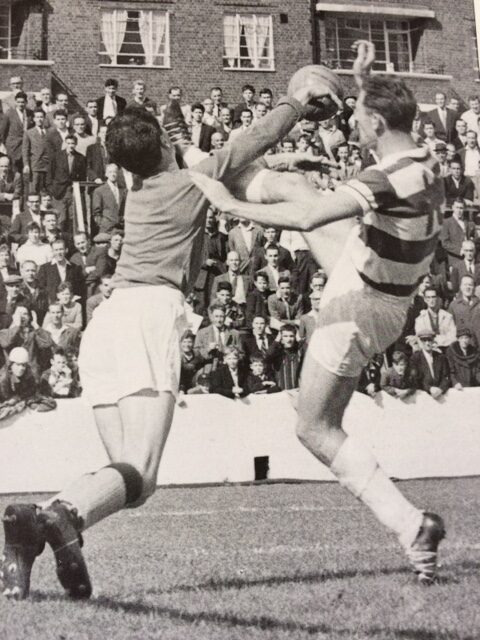 After spells with Reading and Southampton, Brian arrived at Loftus Road from Bournemouth & Boscombe in July 1959.

He made his league debut for the R’s in the home game against Swindon Town the following month on 22nd August. He amassed 27 League and Cup goals in his first season.

During his time at the Rangers, Alan Barnes remembers him coaching at his School, North Paddington Upper.

His final QPR appearance was at Loftus Road on 1stSeptember 1965 against Walsall in a League Cup tie.

Brian notched up an amazing tally of 180 goals during his spell with the R’s, which was second only to George Goddard’s record.

He said this of the Rangers manager: “I owe a lot to Alec Stock. As well as being a fine manager he is a first-rate psychiatrist. Until I met Alec I had an inferiority complex. He changed that. Now he reckons he scored half my goals for me!”

Apart from his association with Scunthorpe, he went on to play for Brentford in 1966, before moving briefly to the USA to sign for Atlanta Chiefs.

Brian ended his playing career with Bexley United in 1969.

I remember meeting him briefly in the early 70’s when he was in the Box Office talking to Tony Ingham. I think he may have been the Stadium Manager at the time?

He retired to Llandaff in 1995 and I remember fondly his final appearance at Loftus Road in 2017 when he was inducted into the ‘Forever R’s Club.’

God Bless Brian, and thanks.

One thought on “In Memory of Brian Bedford”