Bill was down from Edinburgh in March for a Rangers home game and as is customary on these occasions we get to meet up for a pint or two.

After being informed that the Red Lion & Pineapple in Acton was managed by an R’s fan (thanks Steve), I suggested this to Bill and we met up the day after the match.

You can’t usually go wrong with a ‘Spoons’ boozer, but nevertheless Bill had of course, consulted his ‘CAMRA Real Ale Guide’.

The pub had taken its name from two older ones that had previously been situated next to each other. The Pineapple had stood on the corner of Gunnersbury Lane and the records show that the Red Lion address was given as 299 High Street, Acton Hill.

Gunnersbury Lane was widened in 1906 which then saw both establishments being demolished. A new pub known as ‘The Red Lion’ was eventually re-built around 1907?

The Pine Apple, as it was known, is thought to originate from around the middle of the 19th century, but I haven’t been able to ascertain how old the original Red Lion was?

The Acton Gazette reported in 1976 that there was actually a tree in the Saloon Bar!

And this appeared in the Acton Gazette in January 1988: ‘A pub has been praised for the seventh successive year for the quality of its beer. The accolade has gone to the Red Lion & Pineapple, High Street, Acton.

The pub has been recommended in the ‘Campaign for Real Ale’ guide every year since 1981. It is the only Acton pub to receive the distinction this year. Licensee Gill Cooray said: “I’m delighted with our record.” 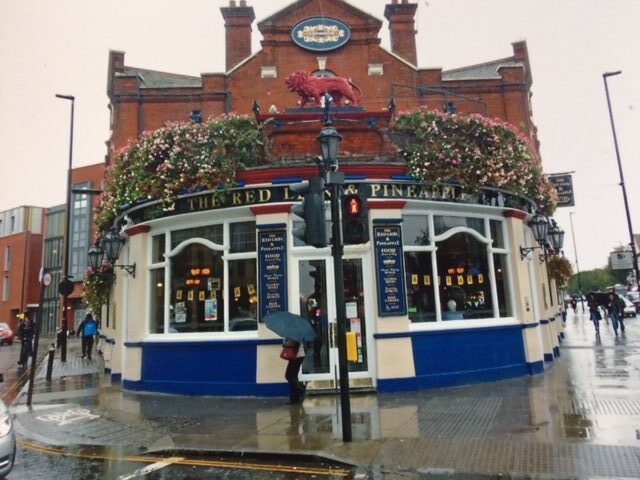 The following article appeared in the Hammersmith & Shepherd’s Bush Gazette in July 1992:

‘Under the new management and direction of Linton Culbert, manager of the Lord Nelson pub and President of the renowned Lord Nelson Baa-barian Rugby Team, the Red Lion & Pineapple is gearing up for a great summer.

Recently refurbished the Red Lion & Pineapple not only offers three bars and the Grape Escape Wine Bar Snug (which offers a great selection of New World Wines), but a flexible function room and extensive beer garden with full barbeque facilities.

Two innovative nights soon to be launched, include the ‘Monday Night Jazz Jam Down’ and the ‘New BandsEvening’ on Thursday nights. Both evenings enable local bands and Jazz musicians to gain exposure and air their talents to the public.

Musicians and bands interested in appearing in the near future should pop down to the pub with a tape.

Quiz night, and ‘Mastermind’ on Tuesday and Wednesday nights respectively, offer great prizes and a chance to pit your general and specialist knowledge against the great minds of the West.

Live music every Friday night sees the best live entertainment available as does Saturday night with ‘HardkassesRoadshow’, which offers the best in pub fun, music, and lots of giveaways.

The function room which seats 40-50 people with ease, offers superb facilities for parties, re-unions and conferences and a comprehensive catering service is available from snacks to a full silver service three-course meal.

Another great facility is the beer garden which can cater for up to 100 people and you can either hold a private barbeque,fully catered for or bring your own food….’

The Ealing Leader announced on 10th December 1993 that J. D. Wetherspoon was coming to Acton: ‘Opens to the public on 20th December. We are looking for polite, cheerful, well presented people to join our successful team in both the bar and kitchen areas.

Experience is not essential as full (paid) training will be given prior to the opening. The managers David and Alison will be there holding interviews on Monday 13th and…….’

Known locally as ‘The Goldfish Bowl’, the pub is spacious and has a circular bar. Old images of Acton adorn the walls and there is a smaller area at the back which tends to be mainly a dining area.

I didn’t get to meet the Guvnor but I will certainly be returning there in the future.