With just a few days to spare, the QPR Women’s final home game was switched from Hanwell Town’s ground to the Kiyan Prince Foundation Stadium.

Sitting behind me in the South Africa Road Stand was QPR Supporter of the Year, Dottie Rees with her family. Spark spent some time entertaining her before she took the field as one of the mascots.

Rangers soon got off to an assertive start. Within the first couple of minutes, Kasha Petit received a great ball in the box but her effort ended up going behind for a goal kick.

Then, Ellen Wardlaw got into a good position, but she fired her shot directly at Bryony Williams. The R’s No.9 then received a superb pass from Sue Kumaning that had split the defence but her attempt went wide of the upright.

Ellie Searle put a good ball into the box, but Mel Hall couldn’t quite finish, and Chardonnay Johnston cleared the danger.

The next goalscoring opportunity fell to the visitors. A dangerous through ball was met just in time by Lucie White on the edge of the box who managed to clear it for a throw-in.

Rangers got the goal they deserved after 34 minutes. Mel Hall’s excellent corner was headed so powerfully by the QPR captain, Vicky Grieve, that Bryony Williams could only finger-tip the ball into the net.

The R’s went close to adding a second after a great ball found Sue Kumaning who then bent her shot just wide of the far post.

Kasha Petit was fouled just outside the box and the resulting free kick was deflected behind for a corner.

However, seconds from the break, as the Canaries swept forward, Jodie Drake was brought down around the centre-circle and Ellie Searle was shown a yellow card. After receiving some treatment, she had to be helped off. Half-time: 1-0.

The visitors equalised a couple of minutes into the second-half. Following a corner, Natasha Snelling fired the ball, low, into the back of the net.

Mel Hall, from just outside the box, curled her effort goalwards, which forced Bryony Williams into a superb save, tipping the ball over the bar.

Kasha Petit’s cross from the right resulted in Elle Searle shooting just over the crossbar. 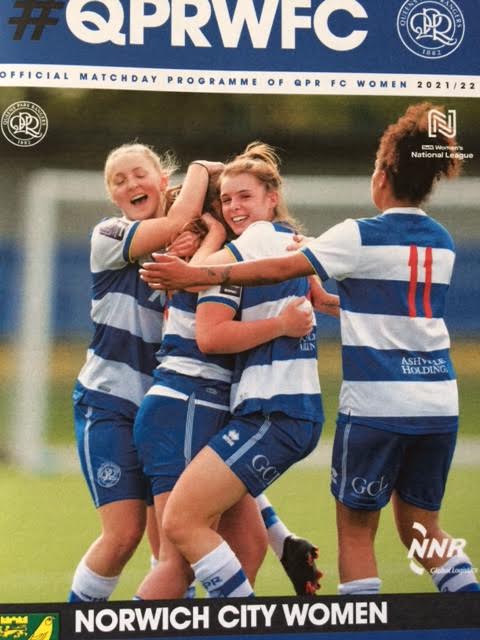 Steve Quashie made a double change in the 58th minute, which saw the introduction of Merle Redhead-Ling and Alice Curr at the expense of Kasha Petit and Mel Hall.

Katie Akerman fed Sue Kumaning who after beating an opponent, curled her shot just over the crossbar. Then soon after, Akerman’s free kick found Kumaning again and the R’s No.7 belted the ball into the side-netting.

A solid challenge on Ellie Searle after 75 minutes left the QPR No.3 staying down and eventually Ailish Carolan had to replace her.

Lucie White charged out to clear the ball, which left her requiring some attention, but hankfully she was able to continue.

Academy graduate Ruby Norman came on for her 1st teamdebut after 86 minutes.

Two minutes later, although under some pressure, Sue Kumaning managed to keep going before turning and smashing the ball into the top corner from just outside the six-yard box.

Bryony Williams was forced into a dive as Erin Pope’s dipping effort came down and it ended up going over the bar.The referee blew the final whistle shortly after.

I was later told that the attendance was somewhere between 450 and 500.

This victory left the R’s in fourth-spot, so well done to Steve Quashie, Jon Whittingham and all the players, coaches and staff.

After such a long lay-off, hopefully we will see her back in action for the start of next season.