On 18th April 1921, QPR took on Chelsea at Loftus Road in respect of a Benefit match for Club secretary, W. L. Wood.

The game kicked-off at 6.30pm and the following match report appeared the next day in the Daily Express:

‘Chelsea, represented by their strongest available team, met Queen’s Park Rangers last night at Loftus Road. An interesting contest ending in a victory for the Rangers, who secured gold medals as a reward for their 1-0 win.

The match had been arranged for the benefit of Mr W. L. Wood, the secretary of the Queen’s Park Rangers Club, who has been connected with the West Londoners for over twenty-one years.

The crowd of 12,000 that assembled to witness the encounter paid an eloquent testimony, both to the game and the club secretary.

The play afforded a contrast in styles. The Rangers swung the ball about, while Chelsea relied on short-passing movements.

The Rangers, however, made it clear that all the talent was not on the Stamford Bridge side, and for a time they sorely harassed the Chelsea defence. Chelsea certainly made some show of resistance, but even so they never had the same prospects of scoring as the Rangers.

Within fifteen minutes of the start the home team took the lead as the outcome of a pretty run down the right, which ended in Faulkner centring accurately for Gregory to head past Molyneux.

Much of the subsequent play ran on even lines, although but for the weak shooting Chelsea should have crossed over on equal terms.

The visiting forwards exhibited far better cohesive methods than their opponents in the second-half, and the home goal was under constant siege for a considerable period. Once Cock shot through a ruck of players, and it was only the lucky intervention of Wingrove that prevented a score.

Towards the end the Rangers became more aggressive, both Donald and Smith testing Molyneux with well-directed drives.’ 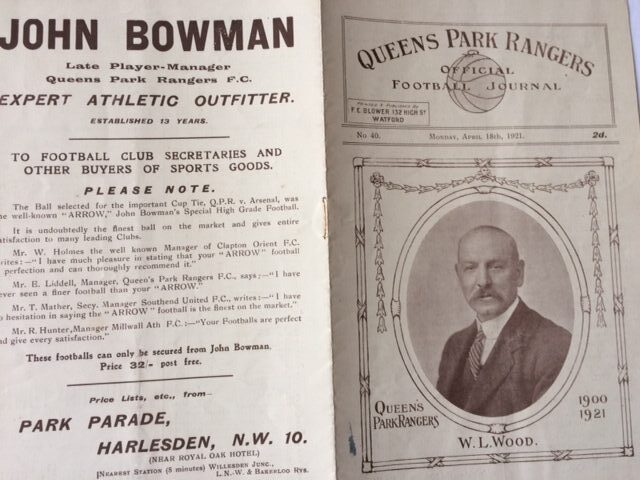 The match programme revealed that in 1887, as a boy, Mr Wood would climb over the fence at Welford’s Farm in Kensal Green to watch the Rangers.

Later, when QPR turned professional in 1898, he was elected onto the Board.

In 1902, he took on the role of honorary secretary, but when the workload became too great, he gave up his position in the City to take it on full-time.

The programme also includes his memories of this amusing incident: ‘Arrangements had been made to sign-on one of Reading’s players.

Arriving at Reading on the last train before midnight, he nearly knocked over the secretary of another London club after the same player. However, Mr Wood says he reached the house first and knocked.

Answered by his wife: “Mr ……. left this morning to sign for another club”. An arranged countersign was then given.

Wife: “Oh, come inside.” The player was signed before the morning milk arrived!’

The directors had arranged a complimentary dinner for him at the Holborn Restaurant on May 12th.

The programme also noted that a lorry would leave the Latimer Arms in Walmer Road for every 1st team home game, 6d per head return.

(Thanks to Sammy for the loan of the programme, Chelsea historian/archivist Peter Wollaston for supplying the match report & Colin Woodley for his assistance)