The home game against Ipswich Town was originally scheduled for 5th February 1977 but was later re-arranged for the 16th May. Steve Curry’s match report appeared the following day:

‘The one-touch football that took QPR to the brink of the League title a year ago last night secured their future next season.

Don Given’s goal, the climax to a typical Rangers’ attacking move, ends the anxiety that has swept through the West London club over the last six weeks.

With two games still to play, Rangers now know that even without another point they have a big enough goal difference to ensure survival.

A delighted manager Dave Sexton said after this victory: “I am particularly pleased we have done the job ourselves without relying on other clubs’ results.”

“In the last two vital games at Leeds on Saturday and against Ipswich tonight, the players at the front have worked very hard for us and done a terrific job.” 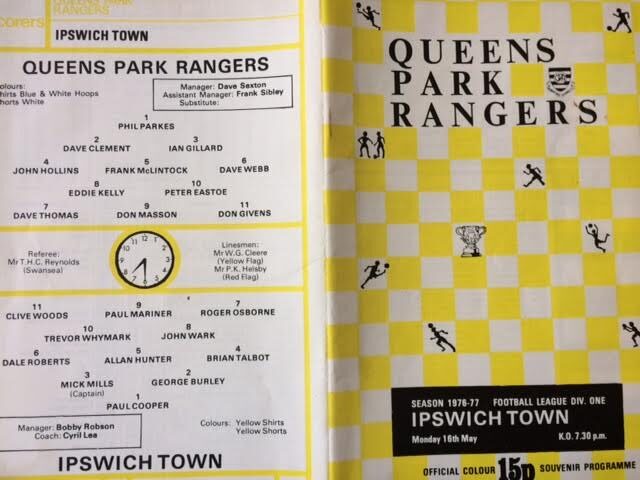 Ipswich, their title chance blown, their place in Europe next season assured, may not have reached the peaks that made them title contenders until late into the winter.

Even so, they contributed plenty in terms of running and effort to provide a match that was always played at a breathless pace, and it was the running in the first-half that took the steam out of a less than match-fit Gerry Francis.

Sexton said: “That was probably the fastest first-half we have been involved in all season and Gerry was feeling it at half-time. That is why we had to bring him off 20 minutes from the end.”

By then Rangers were holding on to the lead given them by Don Givens, his 19th goal of the season – bringing into question whether he should be allowed to leave the club this summer, as he has indicated he would like to do.

His goal was like so many Rangers have scored, a ball played forward by Don Masson, an edge of the box one-two with Peter Eastoe and a quality left-foot finish inside Paul Cooper’s right-hand post.

Paul Mariner matched the shot with one of his own ten minutes later and was unlucky that Eric Gates was standing in an offside position when he swung his left-foot.

Gerry Francis yesterday confirmed that he will be joining the England squad for the Home Championships, even though he expects not to be 100% fit in time for the first match against Northern Ireland on May 28.’

The Club issued the original programme with a couple of outer pages wrapped around it, showing the updated league table, team line-ups etc. The Bush Telegraph reported that:

‘Congratulations to our Youth team on winning the South East Counties League Cup and the Southern Junior Floodlit Cup. It’s been quite a few years since we have seen so many youngsters with such outstanding talents in our Youth Squad – watch out for some of them heading towards stardom.’