On 8th November 1969, second-placed Sheffield United travelled to Loftus Road to take on a QPR side in third. Dick Milford’s match report later appeared in the ‘Sunday People’:

‘The battle of the Second Division giants was an affair of tiny achievement. The wind and the tension were too strong for great skills.

And Rangers, that well-known attacking team, paid United the compliment of being cautious before their skipper, Terry Venables, went off injured in the 37th minute. They were even more so when he had gone.

They finally won both points with a late goal by Frank Clarke, that underrated striker whose fearless battering-ram tactics were valuable in these conditions. His dashes with United defenders reminded me of old-style centre-forward play. 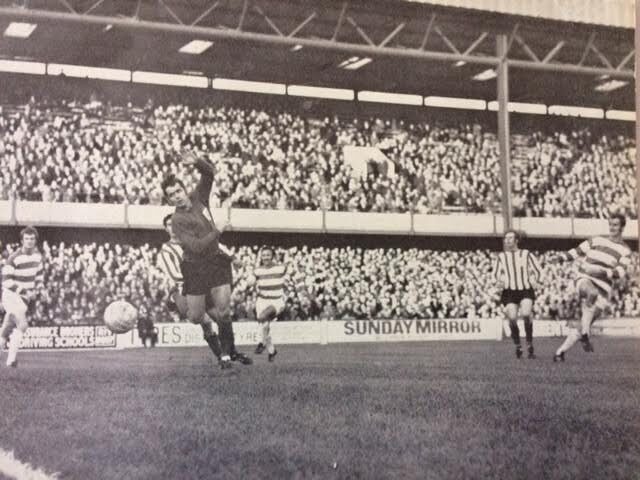 But it was Rodney Marsh who helped with the winner by leaning on Flynn. This unbalanced Hodgkinson and forced him to drop the ball at Clarke’s feet.

Modest Alan Hodgkinson partly blamed himself and, no doubt, regretted that his 600th first-team game for United had to be his first at Loftus Road.

United then did nearly enough to get a second equaliser, but Kelly just saved a Tony Currie shot and Reece’s header was on the wrong side of the post.

Bridges shot an early goal for Rangers after Vic Mobley had been given enough time by a static defence to place a shot – and mis-hit it straight to Bridges.

After this, United had more togetherness than Rangers in midfield but were less dangerous – despite Rangers’ defensive attitude.

Hodgkinson made one exceptional save from Leach and Barry Bridges fired a fine try into the side-netting.

The one United chance that was converted was well taken by Alan Woodward. Only Colquhoun, a defender who took the brunt of Clarke’s dashes, was more impressive in the United side.

The disappointing game left me agreeing with the United manager, John Harris, who said: “The Second Division is still wide open and the first team that hits any consistency can win it.”

Elsewhere there was some criticism of the apparent lack of protection given recently by match officials to Rodney Marsh.

Rangers went on to beat Watford by the same score-line three days later and I can still see in my minds eye Tony Hazell smashing the ball into the net at the Loft End with the last kick of the match!