Kent Football United arrived at the Powerday Stadium marooned at the bottom of the table, but they took the lead within six minutes. A ball through the middle was then chipped over the R’s keeper by Priscilla Martins.

Lucie White then denied the visitors a second goal with a superb save from a powerful effort.

But the home side began to grow into the game and fashioned some good goalscoring opportunities for themselves.

A lovely reverse ball resulted in Mel Hall shooting just wide of the upright. Then, Ellie Searle set off down the left-wing and after cutting in, the United keeper did well to hold on to a fierce shot.

Following some good skill from Kasha Petit, the R’s wing-back steadied herself before unleashing a shot that was tipped onto the crossbar.

Ellie Searle squared an excellent ball into the box, but Demi Edwards just couldn’t quite reach it.

At the other end, good work by the United No.9 resulted in the ball being sliced wide of the target. Half-time: 0-1. 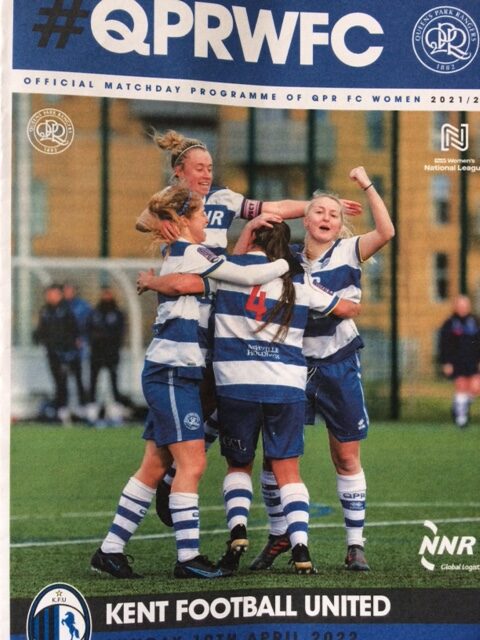 Steve Quashie brought on Katie McLean for the commencement of the second-half.

Katie Akerman headed over the bar after Ellie Searle had won a corner.

The home side got the equaliser they deserved after Mel Hall’s knock-back had set-up Brogan Moore who made no mistake hitting the back of the net.

Emilia Nygaard-Parsons and Erin Pope were introduced at the expense of Kasha Petit and Katie Akerman respectively.

Rangers took the lead after Ellie Searle had superbly reached the bye-line, this resulted in Brogan Moore slotting home.

As Rangers looked to regain the lead, Sue Kumaning’s superb through-ball found Nygaard-Parsons, whose effort was smothered by the United keeper.

Ellie Searle bombed down the wing and after moving in, she fired her shot into the side-netting.

Rangers went even closer in the 85th minute when Erin Pope picked her spot after seizing upon a loose ball.

Mel Hall had switched to wing-back and Ellie Searle was now upfront.

Searle chipped the ball over the crossbar, but the visitors dramatically equalised in added time. Literally seconds from the final whistle, they broke free and Priscilla Martins went on to smash the ball into the back of the net.

Although a point was disappointing, I have to say that the visitors didn’t look anything like a side so far adrift at the foot of the table.