Facing a side that look set to finish league champions, Rangers went a goal down at the New Lodge as early as the first minute.

After losing possession outside the box, Zoe Rushen made no mistake slotting the ball beyond Katie McLean.

However, the R’s were back in it five minutes later. Following an excellent move, a superb pass found Ellie Searle, who in turn, fired the ball into the back of the net.

Looking well offside, a home player ran through and chipped the ball just over the crossbar. Then, I think it was Jay Blackie who, after a clearance, audaciously shot just over the bar from fully 30 yards.

It had been fairly even up to this point but on 28 minutes Zoe Rushen scored her second of the afternoon.

Sue Kumaning denied the home side another goal when she made an excellent interception and clearance following a corner.

Billericay ended the half the stronger of the two sides and they remained 2-1 in front at the break. 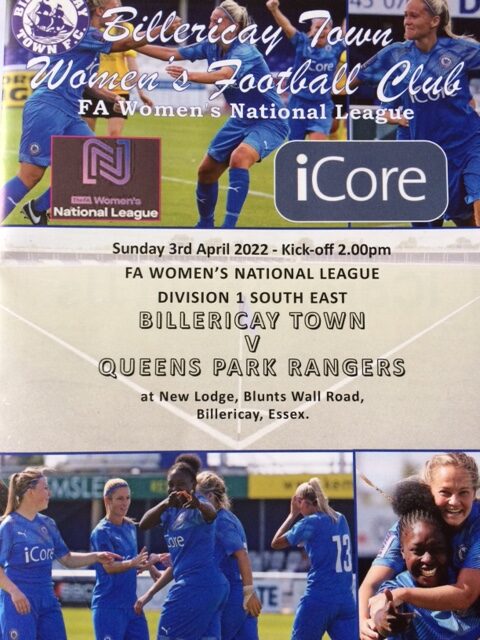 Into the second-half, and Sue Kumaning, although under pressure, broke away but her effort finished wide of the target.

On 52 minutes, Steve Quashie took off Vicky Grieve and on came Ailish Carolan.

A great ball from the left-wing almost found Mel Hall in a dangerous position but the Billericay defender had just managed to reach it first.

It was the home side who looked like scoring the next goal. A close-range effort was blocked and then a free kick closely evaded the crossbar.

Sam Pittuck put Billericay further ahead on 70 minutes when she poked the ball into the back of the net.

And eight minutes later Ellie Jeffkins fired the ball low into the bottom corner from 25 yards.

Erin Pope and Alice Curr were introduced at the expense of Brogan Moore and Mel Hall respectively.

The final QPR effort came after Sue Kumaning’s shot from just outside the box, cleared the crossbar.

The home side certainly deserved their victory, but I think the score-line flattered them a bit.

Well done to Billericay on producing such an excellent matchday programme and thanks to Sammy for the lift.