Three days after drawing 1-1 with Manchester City at Loftus Road, the R’s then travelled to Ipswich on 9th February 1993. Nick Townsend wrote the following match report:

‘Neil Thompson’s belief that he had lifted Ipswich closer to a European return was shattered when substitute Devon White snatched a rewarding equaliser for Rangers with 12 minutes to go.

Rangers had earlier inadvertently contributed to Thompson’s breakthrough goal in the 40th minute. The defender’s fifth strike of the season, after a flowing move involving BontchoGuentchev and Jason Dozzell squirmed into the net through the arms of Rangers’ goalkeeper Tony Roberts.

In the 78th minute, however, White, a 55th minute replacement for Maurice Doyle – brought the hosts down to earth.

Considering the state of this present Portman Road surface, it was a credit to both sides that they effected such a spirited display. 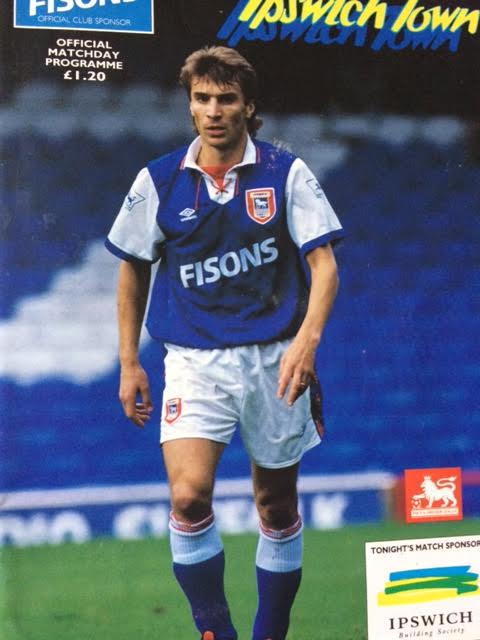 Home pressure produced several corners in the opening minutes but until the goal the closest Ipswich came to troubling Roberts required the inadvertent contribution of defender Rufus Brevett, who directed a defensive header from Chris Kiwomya embarrassingly close to his own post.

Previously, the visitors had looked steady in defence, although a long throw catapulted into the area by Thompson culminated in a worthy effort from an impossible angle at the far post by Guentchev.

Rangers were disappointing, although the pace of Andy Sinton who, along with Les Ferdinand and David Bardsley, feature among Graham Taylor’s squad to face San Marino next week, clearly unsettled the home defence early on.

Whitton had not learned his lesson. A few minutes later he felled the same player and this time the yellow card was brandished, perhaps belatedly.

Ferdinand, looking to advertise his England claims, was well shackled by Andy Linighan and his only first-half attempt flew well wide of keeper Clive Baker’s post.

The home team had been forced to reorganise at half-time when the Australian Vlado Bozinovski, replaced Kiwomya, but they still looked the more dangerous.

Thompson again emerged amongst his forwards to complete a fluid one-two with Dozzell but this time Roberts saved easily.

White appeared as substitute for Doyle and the switch paid off in the 78th minute when he side-footed home a Bardsley cross.’

Rangers’ next Premier League opponents were Coventry City at Loftus Road and recorded a 2-0 win over the Sky Blues.