The R’s had recorded a much-needed 2-1 away win against Norwich the previous Sunday, with goals from Brogan Moore and Erin Pope.

QPR’s next opponents were table-toppers Hashtag United, who had impressively won ten and drawn one of their eleven league games.

Returning in goal for the R’s after incurring a damaged finger, was Lucie White.

The visitors took the lead after just four minutes following a defensive mistake, which allowed Amy-Leigh Abrehart to score the first of her three goals.

Despite this early set-back, the R’s gradually grew into the game. Following a superb passing-move upfield, the final ball, unfortunately, wasn’t equal to it.

United doubled their lead after Vicky Grieve was penalised for a hand-ball in the box. Abrehart stepped up and made no mistake with her spot-kick.

At the other end, after another excellent build-up, Mel Hall took a good touch from just outside the box, rounded a defender and saw her effort come off the upright and into the keeper’s gloves.

The visitors were still looking to increase their lead. Lucie White made a very good stop with her feet and the follow-up then hit the post. Half-time: 0-2. 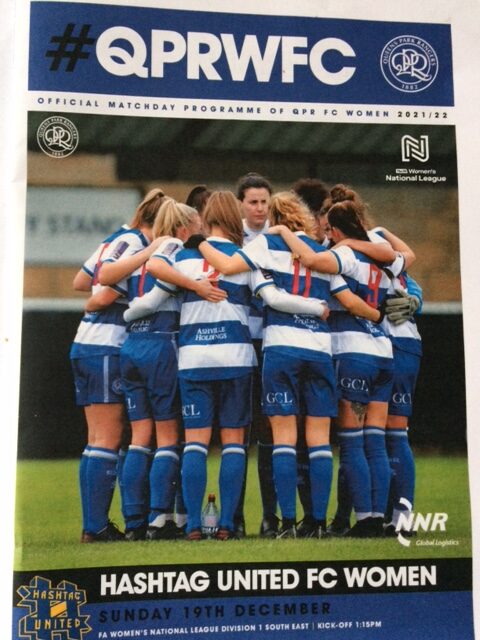 After the break, the R’s soon began to apply early pressure and won their first corner.

Although Rangers were having the best of it, Lucie White pushed away a deep cross and then superbly made a flying save from the follow-up.

Demi Edwards was introduced on 73 minutes and four minutes later QPR got the goal they deserved. Her excellent pass found Mel Hall, who then made a lovely turn into the box and fired the ball past the keeper.

An equaliser looked on for the R’s, but it was the Essex-based side who sealed the result when Amy-Leigh Abrehartcompleted her hat-trick in the closing stages.