The following article appeared in the West London Observer on 31st December 1954:

‘Despite the expenses of Christmas, stores in West London report successful openings to their winter sales this week.

Last night a spokesman of the Barkers group at Kensington said queues had been larger than last year’s, and that the stores had been full throughout the day.

“Crowd’s began arriving at about 7.30 and, outside Barkers,” he said, “the numbers approached 1,000 by the time the doors were opened.”

First in the Barkers queue was Ernest Spillard, aged 15 years, of Rylett Road, Shepherd’s Bush. Ernest, on holiday from St. Clement Danes School was up three hours earlier than usual to be sure of getting a coat for his mother.

The coat he bought, which his mother had admired the previous day in the window, cost him £1.

Women, who entered the stores with the traditional rush, showed special interest in the reductions in coats. The Barkers spokesman said: “Fur coats sold well, with prices ranging from 15 gns. to as high as £1,000.”

Men were attracted to bargains in shirts, suits and overcoats, and throughout the day customers were trying on and buying fancy waistcoats. 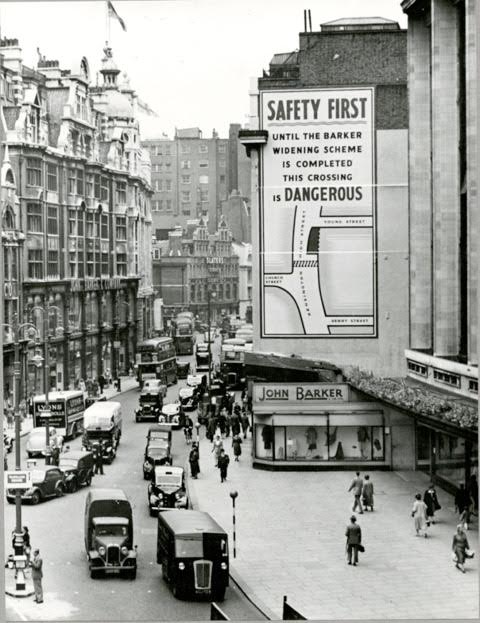 Outside Pontings people waiting in the queues were served with coffee and biscuits. They opened with cut-prices on frocks, coats, skirts, dresses and gloves for the ladies. Shirts, overcoats, trousers for the gentleman. Bath towels, linen and Axminster carpets which should attracts crowds of both sexes.

Those needing a renewal of winter clothing after the recent “shock” weather should find Anthony Trent in Uxbridge Road, Shepherd’s Bush, a boon. Their sales begin today.

Here there are reductions in raincoats that should see everyone ‘mackintoshed’ for spring. Weather-proof wool union double-breasted gaberdine raincoats are offered at 75s., almost half the original price of £6 15s. Suits, too, show reductions by almost a third.

And for those brave enough to plump for sunshine in the New Year there are large numbers of sports jackets at 50s. And getting down to details there is – wait for it – men’s underwear at 2s. 11d.

There must be some who do not intend anything as rash as outings, in view of present weather uncertainty, and they may prefer to brighten up their homes. For them, Durantes in King Street, Hammersmith, are offering Axminster carpets 3 yds. by 2.5 yds. at 13 gns. and 15 gns.

Originally priced at £18, a Durantes spokesman says that these carpets are in heaviest demand now. Accordingly, these are some of the best bargains.

You can save £2 on the new suit at Hepworths, King Street, Hammersmith. That includes made-to-measure orders as well.

Raincoats, military style and gaberdine, are reduced by half at Peter Grant, another of the King Street “brigade”. Sports jackets and trousers have also suffered violent reduction. There are a thousand pairs of Cavalry twills down from 52s. 6d. to 19s. 11d. if anybody wants them.

Suits sale-priced at £4 18s. 9d. are available at Weaver to Wearer, who have branches at King Street, Hammersmith, and North End Road, Fulham. Perhaps the feature of their sale is an offer of S.B. or D.B. overcoats offered at £3 8s. 9d.

There are general reductions in all departments at Hawkins stores, King Street, Hammersmith and Portobello Road, Notting Hill, where the annual January sale begins today. There are special bargains in towels reduced from 3s. 9d. to 3s. 3d.

Today the clearance sale at Doris’s ladies and children’s shop, 102 Goldhawk Road, Shepherd’s Bush, will enable customers to buy blouses for as little as 5s., skirts from 15s. and woollen cardigans from 12s. 6d.