Edward Heath’s government announced on 13th December 1973 a number of measures under the Fuel & Electricity (Control) Act, which included the Three-Day Work Order.

On 22nd December, QPR took on Newcastle United at Loftus road. The match kicked off at 2pm and in the 7p match programme the ‘Bush Telegraph’ began its editorial by reporting on current national events:

‘We are experiencing the worst possible luck in producing recent issues of the club programme and we are once again forced, by events completely outside our control, to bring you a sub-standard issue today.

The plain fact of the matter is that it is impossible for our printers to produce our normal highly sophisticated 20-page colour production, when due to the Government measures to combat the national power crisis, the printing staff can only work three days in a week. 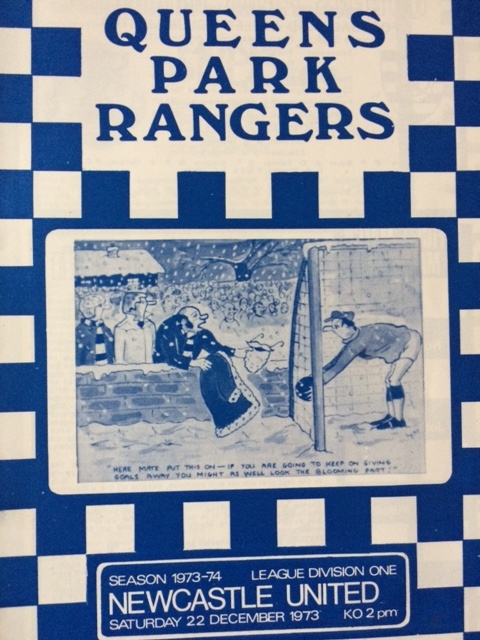 ‘This five-goal spectacular was the answer to the prophets of doom about the state of British soccer.

ITV’s ‘The Big Match’, should be compulsive viewing today for all lovers of football – especially the stay-away fans.

Rangers manager Gordon Jago summed up after watching his team surrender a 2-0 interval lead and then win with a goal in the last seconds: “The losers were the fans who missed this spectacle.”

Even Frank McLintock, who forecast this week that there won’t be Soccer as we know it in seven years if Soccer’s thinking does not change, gave the match a one-word accolade: “Tremendous.”

Newcastle, who had the chances to have made the score-line somewhere around 6-6, could moan at their ill-luck in losing after a fight-back that produced an 89th minute equaliser. But the real winner was football.

Terry Venables and Gerry Francis were magnificent for a Rangers side battling back to form after six games without a win. Stan Bowles had moments of magic.

And if I single out Terry Hibbitt and Terry McDermott from the Newcastle side, it is only because they were a shade above some of their team-mates.

Unbeaten in the league at home, Rangers watched by Spurs’ assistant manager Eddie Bailey, survived early on when Tommy Cassidy, after beating Frank McLintock and Terry Mancini in the penalty area, shot wide with only Phil Parkes to beat.

But a first goal of the season by full-back Dave Clement after 26 minutes settled them. The build-up by Venables and Francis would have graced Leeds or Ajax, and Clements’ shot went in off a post.

Another Venables-Francis move led to a second goal ten minutes later and, when the ball glanced off Bobby Moncur’s head from a Francis cross, Don Givens crashed it past Ian McFaul.

A moment of indiscretion by Stan Bowles brought Newcastle back into the game. Bowles ran back to commit a retaliatory foul, and, from Hibbitt’s free kick, McDermott hit in a shot that was deflected off Ian Gillard away from Parkes – who reckoned the original was going wide.

Referee Mike Kerkhof bravely awarded Newcastle a last-minute free kick for obstruction in the area – and that brought the equaliser.

I thought it was a clear-cut penalty, but justice was done when Hibbitt passed to Moncur, whose shot went through the crowded goal-mouth and beat Parkes, who was obstructed by Mancini as he tried to reach the slow-moving ball.

It looked all over bar the shouting. But Mick Leach won the ball by a corner flag and played it back to Francis. Again, Francis found his skipper with a pass – and Venables pushed it on to Bowles.

Stan’s 11th goal of the season set the seal on a magnificent match and put Rangers above Newcastle in the table.’

The R’s went on to draw 0-0 at White Hart Lane on Boxing Day.