On a bright but very cold afternoon at the Powerday Stadium,it was the visitors who provided the first attack, which resulted in their effort hitting the side-netting. This was soon followed by a shot that narrowly evaded the crossbar.

It was no surprise when Billericay took the lead on seven minutes after the home side had lost possession. Rebecca May rounded the R’s keeper and slotted the ball in the net.

Kasha Petit’s superb ball into the box forced a corner, which was then followed by a second one.

At the other end, the R’s wing-back was well-placed to clear off the line and despite the follow-up shot going wide, the referee decided to award another corner!

Rangers went close to an equaliser when Mel Hall’s first-time effort from inside the box was kept out by Alex Baker’s legs.

A dangerous lob into the box came off the post but the ball found its way into Mya Francis-Pownall’s gloves. Half-time: 0-1. 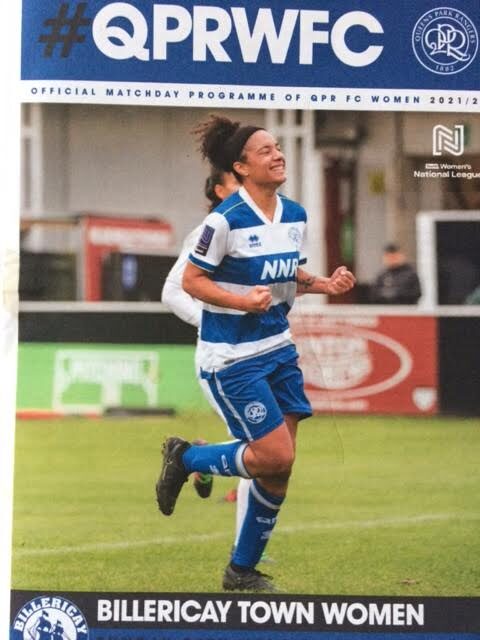 As QPR looked for an equaliser, a great run down the left to the bye-line resulted in the dangerous cross being put just wide of the upright. Then Mel Hall’s shot was palmed behind for a corner.

On 59 minutes, Steve Quashie brought on Jo Blodgett at the expense of Erin Pope, which was then followed ten minutes later by Emilia Nygaard-Parsons replacing Alice Curr.

A good ball in from the bye-line resulted in a big scramble in the Billericay goalmouth and the danger being averted.

Then, a cross from the right evaded Francis-Pownall, but Lauren Jordinson was backing up to clear the ball from close to the goal-line

With the R’s still looking to pull a goal back, Ellie Jeffkinsdoubled Billericay’s lead on 86 minutes following a free kick.

The visitors broke away a minute or so later and Rebecca May scored her second of the afternoon.