I attended my first ever Rangers match on 8th November 1958 when the R’s took on the Saints at Loftus Road.

We were still living in Rylett Road, Shepherd’s Bush at the time and Dad took me for the short journey to the game. I don’t recall very much about the match, but I do remember that we sat in the Ellerslie Road Stand.

‘The “Saints” came marching in with the mark of promotion candidates stamped all over them at Loftus Road on Saturday. They all but took two points from battling Queen’s Park Rangers in this Third Division thriller (writes “TEMPO”).

What a curtain raiser for Rangers’ tough FA Cup tie at Walsall this Saturday! Rangers gamely fought back to preserve their unbeaten home record. They have now played 15 home matches without defeat – a great run.

Cultured right-half, George Petchey, proved Rangers hero with their equalising goal late in the second-half. It was fitting he should be so rewarded as he stood out as Rangers’ outstanding player.

Tony Ingham, Rangers’ skipper and left-back, played his heart out in defence and saved two certain goals with goal-line clearances.

Rangers relied too much on Arthur Longbottom as the spearhead in attack, while Pat Kerrins was rarely seen. 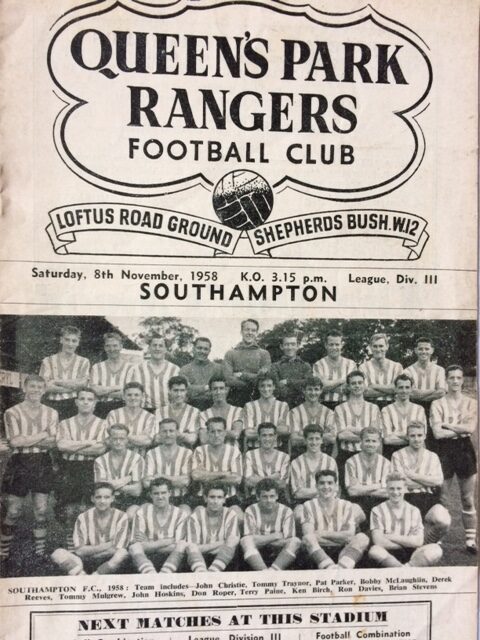 It was an unhappy day for Rangers’ centre-half, Keith Rutter,as he was given the runaround by lively “Saints” leader Charlie Livesey.

Rangers shook “Saints” by taking the lead after only two minutes. George Petchey slipped the ball through the middle for tearaway Arthur Longbottom to run on to it and slam past the advancing goalkeeper, John Christie.

Fortunately for “Saints” they soon countered this setback nine minutes later. Livesey gave Rutter the slip and his shot cannoned off a post. The ball was temporarily cleared but inside-left Tommy Mulgrew sent in a long, dipping shot which dropped out of goalkeeper Ray Drinkwater’s reach into the net.

Goalmouth thrills abounded at each end and “Saints” escaped when left-half Peter Angell’s shot from the wing beat Christie and crashed out from the far post.

Tony Ingham was again on the spot to kick clear from the line, this time from outside-right Terry Paine and Ray Drinkwater pulled off a fine save from the elusive Livesey.

The more compact “Saints” team deservedly took the lead 14 minutes after the interval. Roper’s astute through pass found outside-right Paine who drew Rutter and chipped the ball across from the goal-line for Livesey to nod an easy goal.

Rangers struck back and forced a series of corners on the right which was mostly wasted by Dawson. However, it was from one of his corners that Rangers equalised in the 72nd minute.

Alec Dawson swung the ball across and in the scramble,goalkeeper Christie lost sight of it and George Petchey moved up and hammered the ball into the net from close range.

The game dramatically swung in Rangers’ favour and the “Saints” goal was subjected to a constant bombardment. John Christie was forced to charge down a ferocious shot from Peter Angell.

Rangers’ wing-halves looked more likely to score than their forwards with the exception of Longbottom.

A draw was a fitting finish to a rip-roaring match which made the crowd forget the cold in their excitement. This is the stuff to give them Rangers.’

Arthur Longbottom’s goal made him the Third Division’s leading goalscorer with 14 goals.

The programme editor warned in his notes that unless ‘youthful hooliganism’ ceases, the directors will consider charging youngsters full price or even banning them from the ground.

For the FA Cup tie at Walsall the following week, coaches were scheduled to leave the ground at 8.30am. Return fare was 14/9d and half-price for juniors.

Rangers went on to win the match 1-0. Alec Dawson was the R’s goalscorer.

(Thanks to Colin Woodley and Bernard Lambert for their assistance)