Albert Edward Bonass: He joined the R’s in 1939 from Chesterfield. After serving as a reserve police officer, Albert joined the RAF but lost his life when his Stirling bomber crashed on 8th October 1945.

Albert ‘Ben’ Butler: He was the first professional footballer in the ranks of the 17th Middlesex to lose his life. The Rev. Samuel Green recorded his impressions of the rugged centre-half:

I look at the papers and see his thigh is shattered – always dangerous, these wounds. However, the danger is not immediate, and I shall have many more half-hours at this bedside.

Frank Cannon was attached to the 11th Essex Regt. And had been acting as Company Sgt. Major for three weeks before his death. He was wounded by shrapnel and expired on the way to the dressing station. He left a wife and two children.

Charlie Clarke: He made six league appearances for the R’s between 1936 and 1938. Charlie was a Luton Town player at the time of his death in 1943.

Joseph Dines won more than 30 amateur caps for England and also played in all three matches for the Great Britain team in the 1912 Olympics which earned him a gold medal. He was cut down by machine gun fire on the Western Front in September 1918.

Albert Edwards made 17 1st team appearances for the Rangers between 1902 and 1905. He lost his life in the Great War.

Alan Fowler guested a few times for the R’s during 1940/41 and also later during the 1943/44 season, but he was actually on Swindon’s books. Sgt. Fowler lost his life during the D-Day landings.

Oscar Horace Stanley Linkson: Andrew Riddoch’s highly recommended book: ‘When the Whistle Blows’, refers to the time when this former Manchester United right-back was arrested on one occasion after he had absented with Pte.Wilfred Nixon of Fulham to play for the Rangers at White Hart Lane.

He enrolled with the 1st Battalion of the Middlesex Regiment. Oscar went missing on 8th August 1916 during the battle to take Guillemont Station, but his body was never found. His mother never accepted that her son was dead, choosing to believe that he had run away to escape what she believed to be an unhappy marriage!

Evelyn Henry Lintott was QPR’s first full England international. He was killed on the first day of the Battle of the Somme after leading his platoon of the 15th West Yorkshire Regiment over the top.

Robert McLaren Law made his lone Rangers appearance against Plymouth Argyle in the final Southern League match of the 1910/11 season.

Pte. Law served with the 4th Battalion Cameron Highlanders and died from his wounds in 1915, aged just 24. He is remembered with honour on the Le Touret Memorial.

John H. Pennifer arrived at QPR in 1913 and after just three appearances, he enlisted the following year. John lost his life at the Battle of the Somme.

Albert Rogers joined the Rangers in 1907. Three years later he was transferred to Bristol Rovers. Albert enlisted in the Middlesex Regiment and later joined the East Surrey’s. He was killed in action on 4th April 1918.

H. V. Thornton made his QPR debut on 9th September 1911. He was one of many players to join the Footballer’s Battalion. The Battalion was actually the 17th Middlesex Regiment. Harry lost his life in France.

Corporal John Tosswill made three appearances for the Rangers before joining the Royal Engineers. He became a dispatch rider but had to return home after being wounded. Sadly, he passed away on the operating table in Eastbourne Military Hospital in September 1915.

Also to be remembered are two R’s fans who sadly lost their lives in the recent conflict in Afghanistan.

And acting Corporal David Barnsdale – 33 Engineer Regiment (Explosive Ordnance Disposal). He was the same age as Tom when he lost his life clearing explosive devices. His parents laid a wreath on the centre-circle prior to the Burnley home game in 2010. 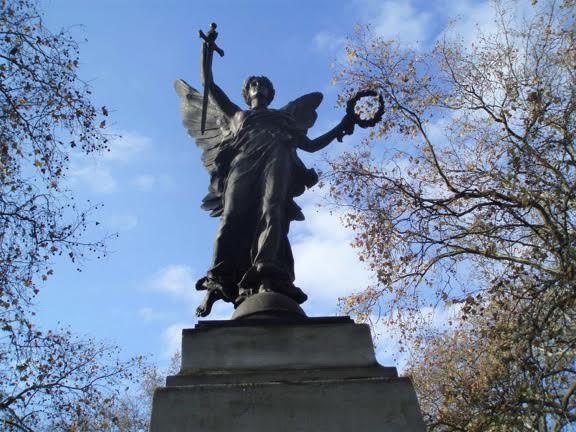 This background to the selection of the ‘Unknown Warrior’ comes from the Westminster Abbey website:

‘The idea of such a burial seems first to have come to a Chaplain at the Front, the Reverend David Railton (1884-1955)), when he noticed in 1916 in a back garden at Armentieres, a grave with a rough cross on which were pencilled the words: “An Unknown British Soldier”.

In August 1920 he wrote to the Dean of Westminster, Herbert Ryle, through whose energies this memorial was carried into effect.

The body was chosen from unknown British servicemen exhumed from four battle areas, the Aisne, the Somme, Arras and Ypres, (some sources say six bodies but confirmed accounts say four).

The remains were brought to the chapel at St. Pol on the night of 7th November 1920. The General Officer in charge of troops in France and Flanders, Brigadier L. J. Wyatt, with Colonel Gell, went into the chapel alone, where the bodies on stretchers were covered by Union flags.

They had no idea from which area the bodies had come. Brigadier Wyatt selected one and the two officers placed it in a plain coffin and sealed it.

The other three bodies were re-buried. Wyatt said they were re-buried at the St. Pol Cemetery but Lt. (later Major General Sir) Cecil Smith says they were buried beside the Albert-Baupaume road to be discovered there by parties searching for bodies in the area.

In the morning, Chaplains of the Church of England, the Roman Catholic Church and Non-Conformist churches held a service in the chapel before the body was escorted to Boulogne to rest overnight.

The next day the coffin was placed inside another which had been sent over specially from England, made of two-inch thick oak from a tree which had been grown in Hampton Court Palace garden, lined with zinc.

It was covered with the flag that David Railton had used as an altar cloth during the War (known as the Ypres or Padre’s flag, which now hangs in St. George’s Chapel).

Within the wrought iron bands of this coffin had been placed a 16th century Crusader’s sword from the Tower of London collection. The inner coffin shell was made by Walter Jackson of the firm of Ingall, Parsons & Clive Forward at Harrow, North London and the larger coffin was supplied by the undertakers in charge of the arrangements, Nodes & Son.

The coffin plate bore the inscription:

(My thanks to Andrew Riddoch, Colin Woodley, Peter Trott & the late Gordon Macey)

2 thoughts on “We Will Remember Them”