On 6th August 2005, the R’s travelled to the then KC Stadium, for the opening match of the season.

‘The Times’ reported on the infamous chanting that afternoon from a section of home fans to our left:

‘Adam Pearson, the Hull City chairman, had pledged to conduct a “full and thorough” investigation in conjunction with Humberside Police into allegations that his club’s supporters taunted rival Queen’s Park Rangers followers at the weekend with sickening chants about last month’s London bombings.

Pearson has vowed to ban for life any supporters found responsible for the events that marred Hull’s opening fixture of the new Coca-Cola Championship season at the KC Stadium on Saturday.

It is understood that sections of home supporters mocked their rivals about the atrocities that took place in London on July 7 and 21. 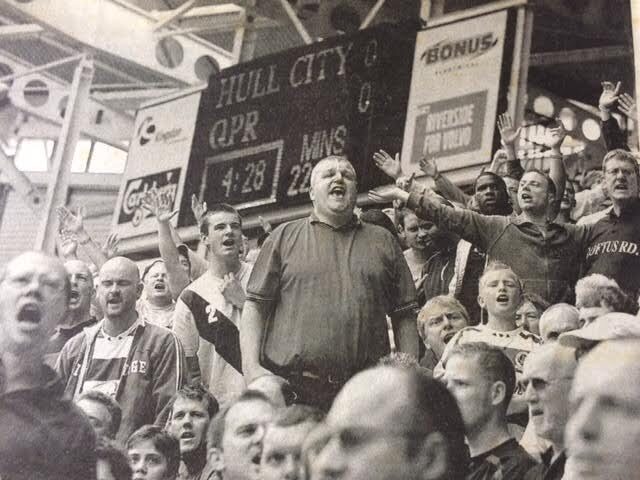 Travelling supporters who had made the long journey to East Yorkshire were so incensed by the mindless chorus of abuse that several hundred left the ground before the game had ended.

Others, however, tried to tear down a fence outside the ground separating the two sets of supporters, prompting police to intervene as the situation threatened to turn into violence.

Pearson will meet police today to study video footage from inside the ground with a view to identifying those responsible. Hull’s profile is at an all-time high after successive promotions and Pearson, a former director of Leeds United, has spent millions improving the status and image of the club.

“I’ve been told the fans chanted, ‘You’re a town full of bombers,’ but I didn’t hear any of the chants,” he said. “We will be conducting a full and thorough investigation into this matter. Obviously, if the allegations are true then we, as a club, completely abhor this sort of behaviour and those responsible will be dealt with accordingly – and that means banning them.”

One travelling supporter, Adam Barford, who attended the match with his twin daughters, said: “The first chant was, ‘You’re just a town full of bombers’. I thought the police were slow in reacting. It was terrible. Even the police admitted they were embarrassed by it.”

A Hull official said last night: “I heard it and it was sick. It changed what had been a great atmosphere.”

Superintendent Andrew Street, the match commander said: “I would like to offer both my personal apologies and those of Humberside Police to the QPR supporters present at the match and also to the relatives and friends of those caught up in the London atrocities last month.”

“We will study CCTV footage to ascertain if it is possible to identify who is to blame. The whole incident took us by surprise, to be honest, but then again how can you anticipate such despicable behaviour from people who set out to go and watch a match.”

“Some of the QPR fans reacted in the wrong way and tried to have a confrontation with rival Hull fans, so we had to deploy officers to defuse the situation, but there were no arrests.”

As for me, the moment I heard it, I started to sing: ‘Maybe It’s Because I’m A Londoner’. As for the match, it finished goalless.