At the time the Club were experimenting with Friday night home games (‘Friday Night is Rangers Night’).

So, two days later, on a cold, foggy night in W12, I took my regular place on the South Africa Road halfway-line with some of my school mates. The following match report appeared in the local Gazette:

‘Playing their third game in a week, Rangers set out to prove from the start that they are not suffering from any cup hangover.

On a cold, foggy Friday night, only weak finishing deprived Rangers of a very incisive victory over Barnsley.

Rangers’ strength, as always, lay in the half-back pair of Brady and Hazell. These two were alert and hard tackling, giving the visiting inside-men little scope, and setting up numerous attacks.

Skipper Keen – shifted up with the forwards for this game – often dropped back towards his old half-back position and his penetrating through balls kept Bedford and McAdams supplied with a wealth of scoring opportunities.

In the opening minutes, when the fog was at its worst, both Keen and Morgan went close with shots that goalkeeper Hill just managed to push clear.

Then – right against the run of play – Barnsley took the lead. Byrne centred and O’Hara hit the ball past Smith. 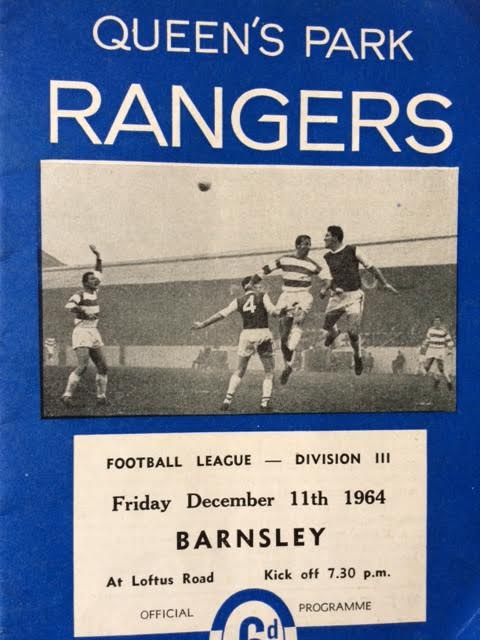 Five minutes before the interval, Bedford equalised with the first of his hat-trick goals. Pat Brady took a free kick, the ball was headed down to Bedford and the centre whipped it into the net.

Visibility improved after the interval and soon Bedford scored again. McLeod smashed the ball against the post and Bedford was perfectly in position to shoot Rangers into a deserved lead from the rebound.

A minute later he completed his hat-trick when he tapped home a McLeod corner kick. Rangers then looked for a morale-boosting margin of victory.

Bedford and McAdams always looked dangerous in their approach work, but hesitant passing in the area and weak shooting cheated Rangers of further goals.

O’Hara – in a swift upfield breakaway – got a second for Barnsley. With the whole of the home defence out of position,he ran on to a pass from Sheavills and scored.’

The match programme reported that: ‘New director, Mr Jim Gregory has invited the players and staff out for an evening just before Christmas so that he can introduce himself and feel part of the club.’

(Thanks once again to bradleyog for passing on his wonderful scrapbook)