The Club’s plans for the formation of what was to be known for some time as, ‘The Boy’s Pen’, were laid out in the West Ham reserve programme on 4th September 1948:

‘The main complaint, however, was the slow rate of entry at the South Africa Road entrance and the danger to which boys were subjected, due to their being seated along the touch-lines and behind the goals.

Firstly, let us deal with the boys’ problem. After consultation with representatives of the police, the management have agreed that the only safe way to accommodate the youngsters is to allocate a section of the ground for juveniles only.

Accordingly, part of the Loftus Road terracing will be cordoned off for this purpose and juveniles will be admitted through the turnstiles provided for them at the Ellerslie Road entrance only.

No juveniles will, in future, be admitted through the turnstiles at Loftus Road or South Africa Road.

The decision has been made solely to protect the youngsters,and supporters are earnestly requested to co-operate with the management.

Many capacity crowds are expected this season and children standing on the terracing or sitting near the touch-line are in grave danger of serious injury.

To avoid this, any child outside the special section will be asked to go to that section, otherwise they will have their money refunded and have to leave the ground.

Adequate police and stewards will be posted to look after that. We do appeal to all concerned to give their assistance. Their safety is at stake. No one can afford to gamble with children’s lives and limbs.

The alteration in the juvenile admission will allow two extra turnstiles to be used for adults’ admission at Loftus Road and one extra at the South Africa Road entrance.

Serious consideration is being given to the replacing of turnstiles at the Ellerslie Road entrance next to the school, but until the building work at that end is completed no decision can be made.’ 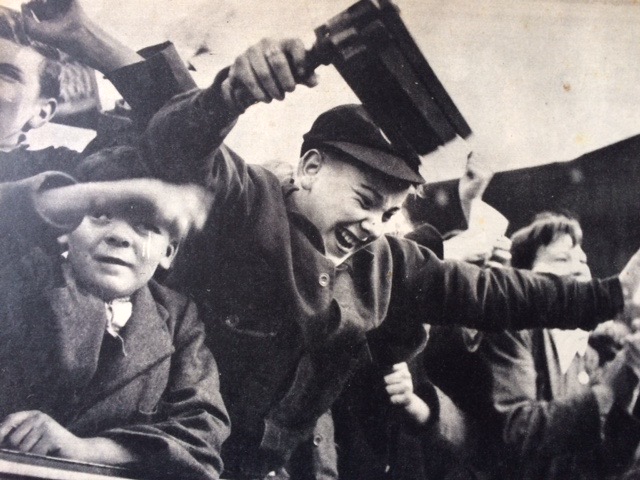 The fans paid ninepence to stand in the enclosure. The above photo appeared in the ‘Picture Post’ a few months later and the caption reads:

‘From Their Own Stand, Queen’s Park Rangers’ Youthful Fans Proclaim: “It’s a Goal”? Two thousand schoolboys watch the game from their own exclusive stand.

A specially-built wall marks them off from the surging adults. Their own passionate interest seals them of in a world where soccer is king.’

8 thoughts on “‘ The Management of Queen’s Park Rangers have Walled off a Special Enclosure for 2,000 Young Fans’”