It came as no surprise when news came through that Paul Smyth had been released at the expiry of his contract.

Paul had joined the R’s in 2017 initially on a two-year deal. I will never forget his 72nd minute winner on New Year’s Day, 2018 against Cardiff City and remember a similar goal later for the U23’s.

Apart from that wonderful goal on his EFL debut, a few months later Paul scored on his debut for the senior Northern Ireland team against South Korea. His goal came just a few minutes after coming off the bench.

At the end of a superb season, Paul was deservedly voted the ‘Supporters Young Player of the Year.’

Unfortunately, the next three years was made up mainly of loan spells with the likes of; Accrington Stanley, Wycombe Wanderers and Charlton Athletic. 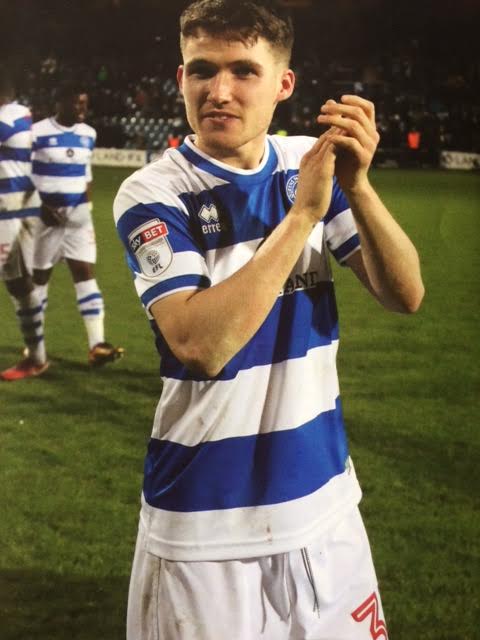 Chris Hewitt gave me the following article three years ago. Titled: ‘Busy Smyth Is New R’s Star’, it had appeared in the Football League newspaper on the 11th March 2018 and was written by John Lyons:

‘There hasn’t been too much for QPR fans to get excited about this season, but the displays of rookie winger Paul Smyth have given them reason for optimism.

Signed from Northern Irish side Linfield last summer, the 20-year-old enjoyed a stunning debut, capped by the winning goal, as the R’s shocked Cardiff 2-1 on New Year’s Day.

Ahead of yesterday’s home clash against ailing Sunderland, he had notched up four starts and two substitute appearances.

The Belfast-born youngster hasn’t managed to add to his goal tally, but his all-action displays have already won over the Loftus Road faithful.

All his attributes were on display in the 1-1 midweek draw against play-off chasing Derby County last Tuesday.

A willingness to run with the ball and take on defenders, the ability to swing over a pinpoint cross, the hunger to win the ball back if he’d given it away and the desire to put in a crucial challenge if the Hoops looked as though they were going to get hit on the counter.

With his lightweight frame, he can look like a boy in a man’s world, yet he packs plenty of punch. You thought his batteries would run out, but he kept going until the finish.

Knock him down and he’d bounce straight back up. He was a pest, a nuisance, a headache for the Rams defence.

Off the pitch, the Northern Ireland U21 international appears to be humble and down to earth. He has a refreshing attitude.

“I like to be busy. I’m very direct and get at people,” he said. “That’s one of the strengths of my game, being direct and not caring who I’m up against. Whether it’s the best left-back in the Championship, I just give it my all on the day.”

“If it’s good, it’s good. If it’s bad, I’ll just re-group for the next game.” You could see by the applause of the supporters at the final whistle that they appreciated his lung-bursting night’s work – and the feeling’s mutual.

“The fans take their time to come and watch us, so I just give my all for them and try to do well so they can have an exciting game to watch,” he said.

“I like to be direct, to give them something to cheer about. The fans getting behind you in a game when you’re 1-0 down is key.”

With QPR safe, it could be a good opportunity for manager Ian Holloway to give Smyth more minutes before the end of the season. He’s already shown he’s a quick learner.

“I’ve played against a couple of the top teams in the league in Cardiff and Derby, and I’m getting used to it,” he said. “I’ll not get there until I get a load of games under my belt to get a lot of experience.”

“I can play right-wing, left-wing, upfront, right wing-back. I’ll play wherever, as long as I’m on the pitch, giving 100 per cent and doing my best for the team.”

That attitude will be music to the ears of Holloway. And Smyth is determined to make the most of working with the experienced boss.

“He’s a quality manager and I’ll keep learning from him,” he said. “He’s taught me a lot so far about movements, runs.”

Long-term, Smyth has a clear target. “Everyone wants to play in the Premier League,” he said, “but at the minute I’m focusing on QPR. My career is here, and I’ll see how far that takes me.”

But unfortunately, he was released three years later.

“My time at QPR has come to an end! Raging! I didn’t get to show what I can actually do!”

Last week he signed a two-year deal with Leyton Orient.

Good luck to him.