Keith Rutter, stalwart centre-half for QPR FC, has sadly passed away at the age of 89.

During his near-nine-year period with the R’s, Keith was a reliable rock steady, no nonsense defender.

He was rarely injured and certainly in my own personal recollection from 1957 onwards, he never dropped from the first team.

You hardly ever saw Keith venture into the opposition penalty area from a set-play or a corner. He gave his full attention to his defensive duties. That’s the explanation as to why he only scored just two goals for the club.

Keith Rutter left Rangers during the 1962/63 season for a short two-season spell at Colchester United, where he ended his Football League playing career.

I know that this may sound like an old cliché, but they just don’t make centre-halves like Keith Rutter anymore, and that is a shame.

Thanks for the memories Keith. R.IP. 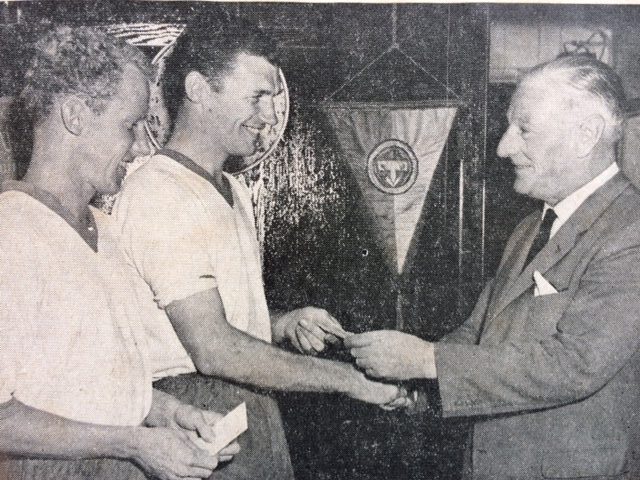 News emerged last month that Keith Rutter had sadly passed away at the age of 89.

Keith was born in Leeds on 10th September 1931 and he later served with the Royal Army Signal Corps.

He arrived for a trial at Loftus Road in April 1954 from West Yorkshire League side Methley United and following an impressive performance in the reserve match against Leyton Orient, Keith signed up two months later.

Apparently, Keith had recommended his team mate at Methley, Arthur Longbottom, to the R’s.

Keith soon went on to make his league debut, initially as a full-back, at Southend on 24th August 1954. He scored his one and only QPR league goal the following month against Newport County.

On 19th November 1960, prior to the home game against Shrewsbury Town, Tony Ingham decided in the dressing room that he would hand the armband to fellow Yorkshireman Keith Rutter. “Let Keith take over right away in view of the coming Cup match.”

Tony had decided to go part-time in order to concentrate on building a business as an electrical contractor.

Brian Dolan remembers seeing Keith driving around in an open-top Ford Consul, dressed like a Teddy Boy! And Keith Davies told me that he had lodged at Mrs Daphne Biggs’ home in Harlesden for a while.

The ‘1958 Sportsmen’s Who’s Who Book’ noted that Keith was living around the corner from the ground at 45, Bloemfontein Road.

Keith had featured in my first Rangers match when Dad took me to Loftus Road on 8th November 1958 when they faced Southampton.

He went on to make 369 appearances for the R’s and apart from that league goal mentioned above, Keith also scored one of the goals in QPR’s first-ever League Cup tie on 17th October 1960, against Port Vale.

In February 1963, Keith was sold to Colchester United for a reported fee of £4,000. The Club noted in the programme that: “He was always a wholehearted player who gave his best in every circumstance – a club man to the core.”

Keith went on to play for the likes of Romford and Ashford Town, before ending his career as player-manager of Hastings United.

After hanging up his boots, Keith took up a job in the Building Trade and was later a Hotelier in Bournemouth. He was to eventually retire to Axminster in Devon.

Rest in Peace Keith, and thanks.

One thought on “In Memory of Keith Rutter”