Ahead of next week’s friendly against Harrow Borough, QPR had visited the Earlsmead ground in 1949 when the Club was known as Harrow Town.

The benefit match on 7th May was in aid of their goalkeeper, Ron Phillips. A match report appeared in the Harrow Observer the following Thursday:

‘Queen’s Park Rangers sent a strong reserve side to play Harrow Town at Earlsmead, South Harrow, on Saturday, and after giving a delightful display of neat teamwork and clever individualism, won as they liked 6-1.

All proceeds were for the benefit of R. Phillips, the Town goalkeeper, who broke his leg in a match against Rangers ‘A’ ten weeks ago.

A football presented by the Rangers and autographed by the players, realised over £8, and although the attendance was not as large as might have been hoped, a useful sum should be handed over to Phillips, who is now about again and hopes to play next season.

The professionals took complete command of the game from the kick-off and the forwards had combined in several beautiful movements before Muir, a forceful right-winger who eventually completed a hat-trick, put them ahead.

Town came near to equalising soon afterwards when the ball had crossed the Rangers’ goalmouth several times without any of the forwards being able to shoot.

Rangers quickly relieved the pressure and the ball was slipped to Gibbons, who ran through to beat Prince with a clever shot taken on the run.

Adams made the total three before the interval, but Town played quite strongly. Pettitt and Austin tackling particularly well and secured a consolation goal when Drinkwater was allowed to run through and beat Saphin. 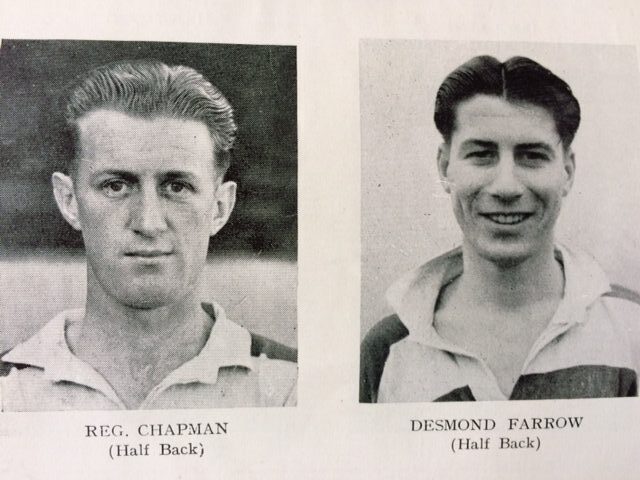 The home players tired in the second-half and at no time exerted the Rangers’ defence, though Saphin made one good save from Drinkwater.

Prince played a fine game in the Town goal but was beaten three more times in the second-half, a feature of which was the excellent way in which young Gee, a Harrow Town junior lent to Rangers for the occasion, fitted in with the professionals.

He had a big share in at least two of the goals and almost scored himself on several occasions. Charman did well throughout.’

The R’s have played Harrow Borough a number of times in recent years.