The news that Barry McGuigan would fight in London for the World Featherweight title was all over the press and the media in April 1985.

Not only was the fight with Panama’s Eusebio Pedroza in London but it was to be staged at Loftus Road.

The fight was shown live on BBC TV and also in America on ABC. Reported to be amongst the 26,000 or so in attendance were; George Best, Norman Whiteside, Dennis Taylor, Willie John McBride and Mary Peters.

Barry McGuigan’s father, Pat, once again stepped into the ring to sing ‘Danny Boy’ to an adoring crowd. Years earlier (as Pat McGeegan) he had represented Ireland in the Eurovision Song Contest.

Barry later recalled: “I just hummed all the way through it. I felt emotional. I had to concentrate on Pedroza.” 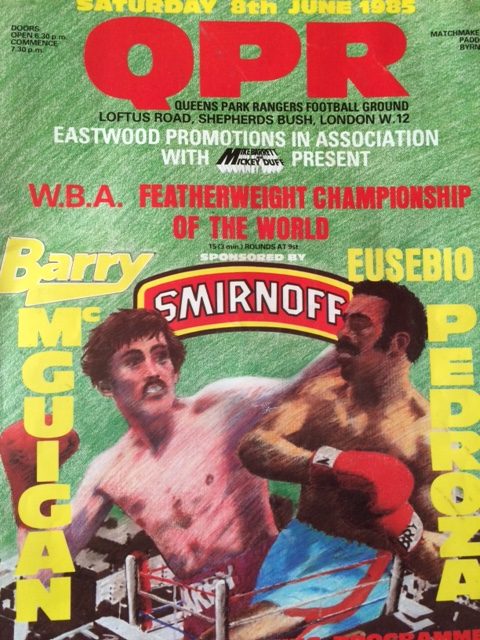 The Sunday Mirror back-page headline the following day proclaimed: ‘Mighty Mac Grabs Title – King of the World.’ Whilst Bill Clarke opened his report with the title: ‘Oh Barry Boy! You are the Tops’, and went on to write:

‘Barry McGuigan, the grocer’s boy from the border town of Clones, is the new World Featherweight Champion.

The brilliant 24-year-old who has united his troubled country, is destined to reign for years to come. No nine stones alive looks capable of withstanding this ferocious country boy who treated a great champion like Eusebio Pendroza with utter contempt at Queen’s Park Rangers football ground last night.

When referee Stanley Christopoulous and his two judges completed their scores, the margin for the Irishman was embarrassingly wide.

McGuigan went so close to knocking out the man who had ruled the world for seven years. In round seven one of McGuigan’s rarely thrown right crosses dumped Pendroza on the seat of his crimson pants.

By the late rounds McGuigan spent the minute intervals grinning at World Snooker Champion Dennis Taylor in a ringside seat.’

Henry Cooper wrote: ‘We ain’t ‘arf proud – Barry, you were magnificent! What a great display. And as he won his world title on a football ground you could almost add it was “easy, easy, easy.”

I thought Barry well won it – in fact, on my scorecard, he lost only two rounds. I noticed one judge even had him losing only one round.

I thought Pedroza the first round with his jabbing and the 12th in which he had Barry in a bit of trouble. That was probably Pedroza’s best round.

But he paid for it in the 13th – he was wobbling all over the place after taking some right-handers from Barry. He looked as if he was out on his feet for a good 30 seconds.

For the rest of the fight Pedroza was boxing on instinct. Boxing from memory – but he has a long, long memory. He was a brave and proud champion and how he didn’t go down in that 13th round I’ll never know.

Now I reckon Barry is good enough, strong enough and fast enough to remain champion for a year, maybe longer – it all depends on his will power. It’s a tough business winning a world title – but it’s tough holding on to it, too.

But being world champion is a lovely thing to do. I hope Barry enjoys it – he certainly earned it last night. Oh, we ain’t ‘arf proud son!’

A convincing victory for Barry McGuigan and Ireland had its first world champion in 35 years!

McGuigan was later quoted as saying: “I deliberately took a stance of neutrality and wore the United Nations flag of peace on my shorts.”

After huge crowds had turned out in Belfast two days later McGuigan said: “It was absolute madness, but great.” Wild scenes were also reported in Dublin.

My mate Declin Daly told me that he picked up a souvenir t-shirt from the Rangers Club shop. It was white with a green shamrock and apart from showing Barry McGuigan’s name it also had ‘QPR’ printed on it.

Then later, he was walking up Kensal Road and the Priest came out of the church and asked him where he had got it from!

(Thanks to Colin Woodley for his assistance. The programme is from my collection)