Dennis Samuels kindly copied the match programme for me but unfortunately, he didn’t participate in the match because he had been injured earlier in the season.

He was advised by the team manager and Supporters Club Committee Member, Bill Waddon, to go to Loftus Road to see the R’s trainer, Alec Farmer. After examining him Alec sent him to hospital where it was ascertained that Dennis had hairline fractures in his foot.

Dennis had to have his leg plastered up to the knee and he told me about the moment later when the nurse peeled it off!

Dennis also told me that Bill Waddon lived at 1a Loftus Road and team talks would often take place at his house. 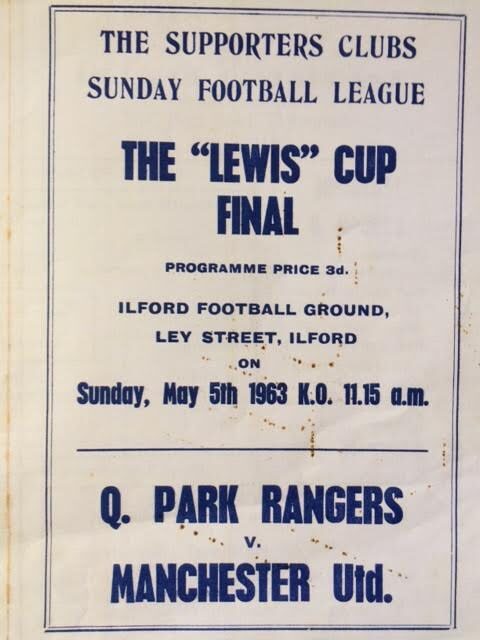 According to the programme, and with no changes shown, the R’s line-up that morning was as follows: M. Gettens, L. Eddington, H. Stewart, M. Fitzmaurice, J. Dunston, P. Dale, J. Friel, F. Radrigus, P. Hamblin, A. Doherty and J. Harvey.

The programme also included a short introduction to the teams:

‘Newly formed in August 1961, under the managership of Bill Waddon. In their first season together, they finished up holding fourth place in the league and reaching the semi-final of the Cup competition.

This season, after a spasmodic start they have now settled down and are undefeated in their last 17 games. A run which has put them in a strong position for the league table. They have the best defensive record in the league and are also undefeated away from home.

They reached the apex of their short history when, this Easter,they went to Lille, France and convincingly beat the reigning N. France champions 4-0.’

Pen pictures of the players followed:

Gettens M. (goalkeeper), 22 years old, 6ft 1ins. tall. Joined the club as centre-forward but has since become a very safe and reliable keeper and has held his place all season. Now under training for the Mounted Police. Mike had a trial with the Rangers Juniors when a boy but found his place later with the Supporters Club team.

Eddington L. (right-back & captain). 24 years old, 6ft two & half ins. tall. Has been with the club for two seasons. Hard working player and very consistent. Has recently got married to a very charming girl.

Stewart H. (left-back), 22 years old, 5ft seven & half ins. tall. Joined late last season, is now a regular and one of the most dependable defenders in the league. Intelligent footballer, fast and very cool.

Dunston J. (centre-half), 19 years old, 5ft 6ins. tall. Joined the club at the end of last season. Took over from J. Smith, Sec. QPR Parent Club, has filled the spot and is unreplacable. Always cool under pressure, tackles relentlessly and moves the ball with more thought than the majority of centre-halves.

Fitzmaurice M. (right-half), 23 years old, 5ft 10ins. tall. ‘Our Martin’ as he is known, was the first player to join our club, gained league honours 1961-62. Sound in defence, but stars as a constructive half-back. Does his own job immaculately and always appears to have the energy to tidy up for others.

Oborn D.(left-half), 21 years old, 5ft 10ins tall. Joined at the end of last season. Great player, keen tackler with an urge to be in the thick of the fray – Doug never eases up. Unfortunately, he will be watching from the line today, having broken his leg in the semi-final, but will be replaced by P. Dale or E. Wood, both these lads are regular players and can fill the position.

Friel J. (outside-right), 18 years old, 5ft two & half ins. tall. Been with the club two seasons. Wee Jimmy the Scot had a trial with Glasgow Celtic. Unfortunately for him, but fortunate for us, his parents moved to London where he got back into football right away. A real goal poacher indeed, improves with every game, very fast off the mark.

Fernando Rodrigus (inside-right), 22 years old, 5ft 6ins. tall. ‘Joe’ to us, he joined this season from West Africa, brought his own sunshine with him, always smiling – a great clubman, plays constant for 90 minutes. Is good with his head and his two feet are filled with dynamite as most league keepers now realise.

Doherty A. (inside-left), 19 years old, 5ft 5ins. tall. Joined the club two seasons ago. One of the best in the league, good ball player with a keen eye for the half-chance. Tremendous worker who does a lot of the carrying and fetching for his colleagues.

Hamblin P. (centre-forward), 21 years old, 5ft five & half ins. tall. Joined this season. Leading goalscorer with 35 goals to date. Persistent hard worker, uses the ball cleverly, has a good head, also can hit a ball with both feet. Has always had a hand in the victory of the game.

Harvey J. (outside-left). John the new boy played well in the reserves, won his place in the Premier side a few weeks ago – used the wing from end to end, good ball control and uncannily clever – good club man. Should go far in the league.’

The ball was donated by the Millwall Supporters Club.

Unfortunately, I don’t have the result, but if anyone has any further information, please get in touch.