On their road to the final, QPR Women FC firstly knocked out Leyton Orient in a penalty shoot-out and Steve Quashie’s side then beat Denham United 6-1 in the quarter-finals.

The R’s met Dulwich Hamlet in the semi-final and came away with a 2-1 victory, which set them up to face Actonians at Bedfont Sports Club in the final.

Actonians came into the game as the favourites. Apart from playing at a higher level, they were also the current cup holders and had reached the final without conceding a single goal.

I met up with Chris Hewitt at Sudbury Hill Station and we went on to rendezvous with Alan Barnes, Martin Botwrightand Ronnie Hill.

Arriving at the ground it was good to meet up with some of the other regulars and I took note of the Rangers starting line-up, which included Demi Edwards. I later read that she also serves as an Army Medic. 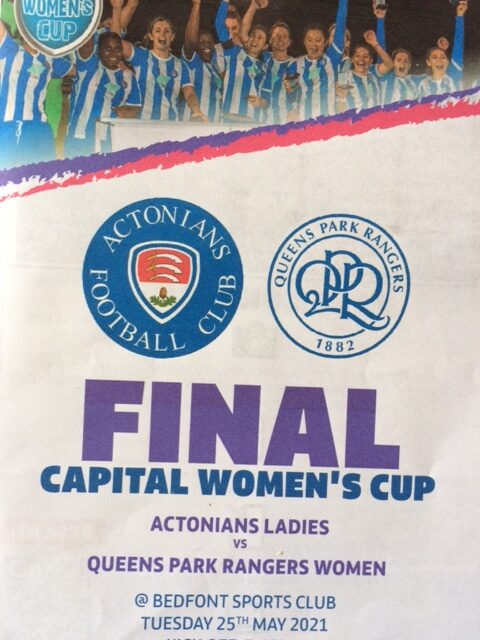 In front of a sell-out crowd (of around 300?), the R’s got off to an assertive start. A good break set up Kasha Petit in the box, but unfortunately the opportunity fell away.

However, Actonians took the lead against the run of play in their first attack when Roschelle Shakes’ shot from 15 yards looped over Lucie White.

In their next attack a minute or so later, the R’s keeper averted the danger when she sped out to successfully smother the ball.

Whilst at the other end, Kasha Petit shot just wide of the post and her next effort was well held by the Actonians custodian.

QPR deservedly equalised after around 30 minutes when Demi Edwards pounced on a loose ball and headed for goal. With the Rangers players outnumbering the opposition in the box, and despite the shouts for her to square the ball, she managed to squeeze her shot into the bottom corner.

But it was Actonians who were to finish the half the stronger side. They won the first corner of the match on 45 minutes, which resulted in a good initial block, followed by Jenny Moore clearing the ball from close to the goal-line.

Actonians could well have snatched the lead just before the half-time whistle when their player, in plenty of space, fired wide. Half-time: 1-1.

After the break it was Actonians who probably had the best of it in the early stages, but that said, Vicky Grieve’s header from Katie Akerman’s corner was dealt with by Naomi Graham.

Unfortunately, one of the Actonian players had to be stretchered off after seemingly turning her ankle? I hope that she recovers okay very soon.

Although the R’s were beginning to take hold of the game it was their opponents who took the lead in the 69th minute from Meila D’Santos’ chip from around the edge of the box.

They then went close to going further ahead soon after when a breakaway move resulted in a shot hitting the post and into the gloves of Lucie White.

Steve Quashie then brought on Eshe Davies who was to be followed in the closing stages by Ailish Carolan and Natalie Skiverton respectively.

Rangers were back in the ascendancy and five minutes or so before the end of normal time and following a good move, the ball was handled in the box and Mr Savva pointed to the spot.Ellie Searle stepped up and made no mistake beating the keeper.

The seven added minutes were played out and the match was to go straight to a penalty shoot-out.

1. Actonians went first and got their noses in front.
2. Natalie Skiverton converted the next one, 1-1.
3. Lucie White managed to superbly knock their secondonto the post. 1-1
4. Kasha Petit made no mistake to make it 2-1.
5. Actonians’ next one sailed over the crossbar. 2-1
6. Laura Hennessy was then unsuccessful for the R’s.
7. Actonians levelled to make it 2-2.
8. Eshe Davies also missed with QPR’s next spot kick.
9. Rangers then went behind. 2-3.
10. Paige Horsnell was unlucky with the next one. She knocked Ellie Searle’s shot up into the air and onto the bar, but when the ball came down it hit her on the back and rolled over the line. 3-3.
11. It was then keeper versus keeper. Paige Horsnell blazed her kick well over the crossbar.
12. So, it was then left to the R’s captain, Vicky Grieve, to seal it for the R’s. 4-3, cue wild celebrations on and off the pitch.

Fittingly, the players quickly covered their red shirts with the Hoops and I was pleased to see that the injured Hayley Peacock was able to join the celebrations. She lifted the trophy after temporarily handing her crutches over to a team mate.

I have to say that I was disappointed with the referee, Mr Savva, who amongst other things, booked four Rangers players!

Well done to Steve Quashie, his players and his staff on this magnificent Cup victory.

And lastly, thanks to Chris Hewitt for digitally sorting out the match tickets for us and also for printing off a copy of the programme for me.