Michael Wale concluded his ‘Report’ in the Cambridge United match programme with his memories of the 1982 FA Cup Final replay:

‘But back to the replay itself – on this occasion, I travelled to Wembley on a coach from the Rangers stadium with the players’ wives. This was not a good idea. Charming though they were, it was like going to a mass wedding. Nerves were at their ends!

The atmosphere was not helped by a brick hitting our coach just as we turned into Wembley Way. Fortunately, it bounced away. As a matter of fact, observing what happened, it was thrown from someone at the back of a crowd. 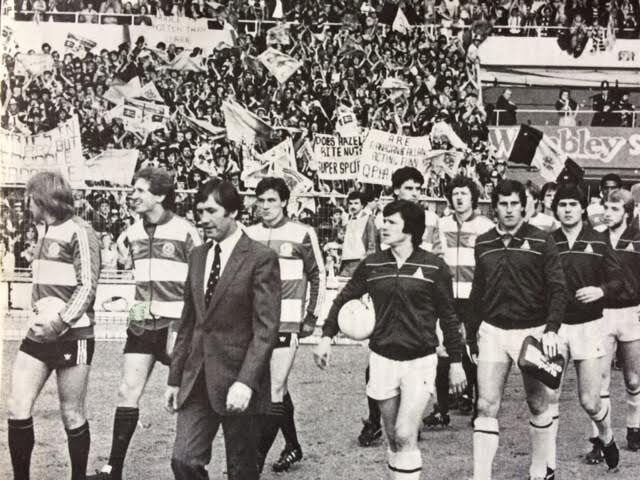 By now I actually thought, I’ll admit, that we’d lose 4-0. Remembering last season’s crashing defeat at White Hart Lane after the 0-0 draw at Rangers. But it was not to be so.

All right, the penalty, quite fairly, happened in the opening minutes. But after that, especially our side (and especially our young players) fought the Spurs off the pitch.

We, and the TV audience, all know that we should have won. We didn’t. That’s life. We hit the bar. We did everything but score. It was magnificent.

So afterwards, when I went looking for the players wives’ bus it had disappeared – there I was alone, very late at night outside Wembley Stadium.

Then, Terry Venables, our manager, offered the dream fulfilment of my life: “You’d better get on the team coach.” And so it was, I returned to Shepherd’s Bush aboard the QPR team bus. The team had lost, so the atmosphere was rather quiet.

However, I represented the supporters. I did not feel we had lost. Gradually I was able to talk to the players around me. A very hard task.

Then, suddenly at Hangar Lane it all happened. There was a Red London Bus with all its windows wound down. Out of every window there hung a Rangers supporter with a blue and white scarf, flag, favour etc.

The team bus slowed almost to a halt. The players were amazed and overcome by this display of support. Suddenly they brightened up. They realised what we supporters had realised. We hadn’t really lost. We had been there and exited in style and that is what I hope this season will be about.’