Michael Wale’s ‘Report’ in the Cambridge United match programme at the start of the 1982/83 season, included some of his memories of the FA Cup Final the previous May:

‘On the morning of the Cup Final itself, I paced myself steadily, having been offered a lift to the match on a QPR officials’ bus at 12.30.

Collected my dyed blue and white carnations from Jean’s Flower Shop by the Adelaide Pub (I invented this favour for the semi-final and was complimented upon it by no less a personage than an Arsenal commissionaire!). Jean, quite rightly, had marketed the idea.

I swear our secretary, Ron Phillips, had told me the Royal Lancaster Hotel. Be that as it may. So, I duly arrived at the Royal Lancaster and was fortunate enough to meet several members of the team, notably Peter Hucker, who had decided to step outside for some air.

It became apparent that I was at the wrong hotel. Someone muttered that I should have been at the Royal Garden Hotel.

So, it was that, by courtesy of Peter Ball, I clambered aboard another coach, inhabited entirely by Northern representatives of a certain make of jeans. Not a Rangers man among them! They were apparently to have lunch and drinks on the way to Wembley.

I said immediately I required neither, just an urgent lift to Wembley itself. However, the champagne was finally directed at me, plus food, which I could not eat and in no time at all we were reduced to a crawl half-a-mile from Wembley itself.

That was the moment I realised the following Rangers would have at Wembley; and more importantly the good spirit Spurs and Rangers fans would display.

The ‘hellos’ before the match in the long bar with supporters of both sides; and friends like Tony Stratton-Smith (friend of Matt Busby and about to make a film of the Manchester United plane crash tragedy), Chris Wright, co-owner of Chrysalis Records and devoted Rangers fan who always asks: “Will we win?”, and also who owns a very fine two-year-old filly called ‘Crime of Passion’. 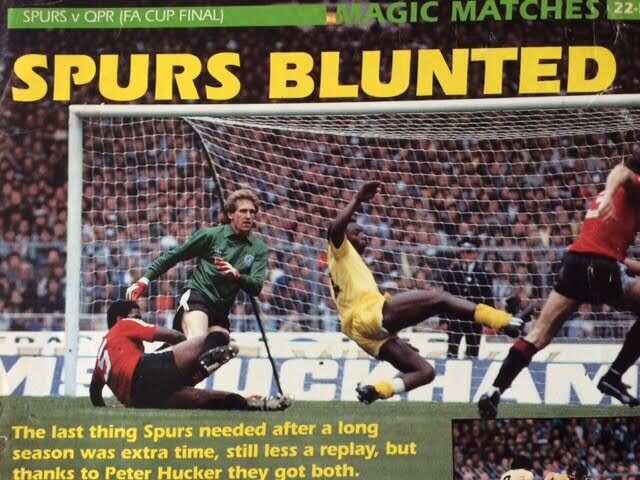 Phil Collins of Genesis, Rangers maniac class as well, who, unlike lesser so-called Show-Biz characters, has never pulled rank at Rangers and has always bought his own seat.(Eventually Phil actually missed our equalising goal, because he was signing an autograph for a Rangers fan!)

All I remember of that equaliser was grabbing the man in front who, like the whole row beside him, were not involved in the match. Then it was over. As far as I was concerned, we had won!

There was tea in some Bear Garden containing more ‘celebrities’ than the Zoo. Then it was time to re-join the jeans men. But, alas, the coach had gone, only to be told they hadn’t allowed for extra time. So, it was another walk onto the tube station.

It was as I went in search of this mythical building that another coach drew up. Its door opened, and I was hauled aboard. It was inhabited by members of the Old Oak Club. Rangers to a man and lady (who had dyed her hair blue and white).  After an excellently swift journey I was dropped off in the Bush.

Now I had to ready myself for the party. Probably one of the greatest honours of my life. I was to join the Rangers and players at the Royal Garden Hotel. This time I got the hotel right!

And there I was with my heroes. And there was Peter Hucker, now a star. Our calm captain, Glenn Roeder, and his delightful parents. Ian Gillard, whose last games for Rangers these would be.

Young Gary Micklewhite, who only a year before might have been at the end of his career. Now, as our sub, seen as more than adequate, and playing as well as I always said he would.

Then the party. Posing with Bob Hazell, and his delightful wife, for pictures. Re-meeting Stan Bowles – “I’ve got a pass-out from White City dogs”.

Frank Sibley, our chairman Jim Gregory, actually talking – he is normally very shy, now moving among his players with excitement.

And the party itself. After an amazing meal, Terry Venablesgot up on stage and said it was time to let our hair down.

Glenn Roeder apologised for saying it, but our chairman was the only man who put his money where his mouth was.

Ray McVay and his band (late of the Hammersmith Palais) burst into Cockney numbers like, ‘The Hokey-Cokey’ and ‘My Old Man Said Follow the Van’.

By now Clive Allen was on crutches and had his ankle in plaster – but he was up there dancing!

Simon Stainrod sported a large black fedora hat. Gary Waddock was as energetic on the floor as on the field. Later Terry Fenwick reminisced seriously, and Tony Currie prepared to become captain for the replay.

It was a wonderful party, no-one became drunk, everyone was happy; we were celebrating Rangers just being there. Reflecting the chorus of the fans: “We were there. We were there.” And so, to the replay….’

For the replay five days later, I remember being in a huge queue the following day that stretched almost back to White City Station.