After beating Tottenham 2-1 at Loftus Road the previous week, the R’s travelled to Maine Road on 14th May 1995 for the final Premiership game of the season. Ian Whittell wrote the following report:

Niall Quinn levelled after 26 minutes, controlling a Nicky Summerbee cross on his chest and hammering the ball past keeper Tony Roberts for a text-book goal.

The stalemate stood until 13 minutes from time when Ferdinand set up Rangers’ second. He bustled defender Alan Kernaghan off the ball and advanced before timing his cross perfectly and allowing sub, Daniele Dichio, to net.

Curle’s initial kick was blocked by Tony Roberts, but he dispatched the rebound.

However, a minute from time, Kernaghan failed to deal with a Rufus Brevett cross and that man Ferdinand converted from eight yards.’ 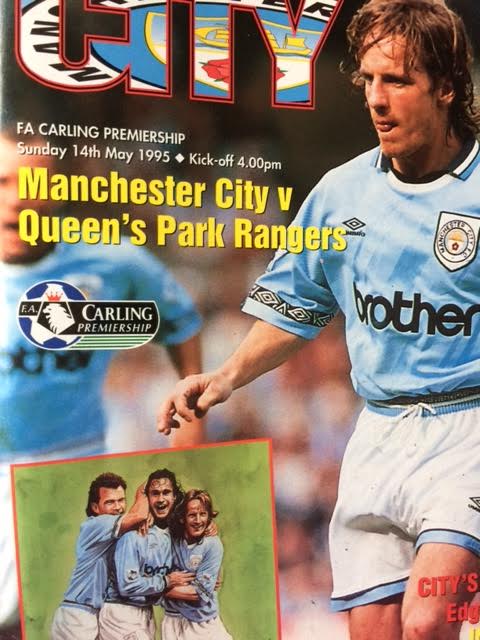 After Horton’s 20 undistinguished months at Maine Road, City chairman Francis Lee will shortly review his options. He believes that Premiership survival is no cause for celebration for his ambitious club.

To their credit, City scurried for every crumb of comfort against a Rangers side who snatched victory through Les Ferdinand’s double strike.

John Burridge struggled as Ferdinand’s header looped over him for Rangers’ 13th minute opener, while Niall Quinn spun and swept his 27th minute shot into Tony Roberts’ goal for the first equaliser.

Ferdinand turned provider on 77 minutes as substitute Danny Dichio put Rangers ahead and three minutes later Maurizio Gaudino was felled and, though Keith Curle’s penalty was parried by Roberts, the follow up was decisive.

There was no denying Ferdinand his 26th goal of the season and Rangers’ first win at City.

The home defence flapped under pressure, Alan Kernaghan fluffed his clearance and the 28-year-old England striker tucked away the simplest of chances.’

Rangers ended the season in eighth spot, two points behind Tottenham, but above the likes of; Chelsea, Arsenal and Palace. Blackburn Rovers pipped Manchester United for the league title by a point.

That was to be Les Ferdinand’s final match for the R’s as during the close season he was transferred to Newcastle for a fee of £6m.