Rangers had won their opening Southern League game of the 1902/03 season at Kensal Rise on 3rd September with a 2-0 victory over Wellingborough.

‘The alteration from the usual order of things, which brought Queen’s Park Rangers instead of Millwall to Tottenham on the first Saturday of the season had no effect in diminishing popular enthusiasm, there being no fewer than 13,000 spectators of the game with which the Spurs opened the Southern League tournament.

They were entertained to some very exciting play, but the match left the majority of them disappointed – there was a pretty good leavening of Queen’s Park Rangers’ supporters who were, of course, delighted – in as much as the Spurs failed to obtain both points.

It was a very hard game in spite of the warm sunshine, and we are not prepared to say that the play would have been better reflected by any other result. 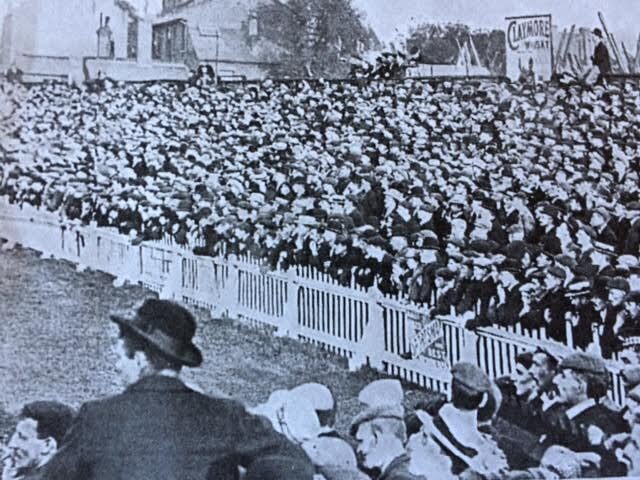 In the second-half the Spurs no doubt made some strong attacks on the visitors’ goal, but the home forwards were erratic, and the Rangers defended admirably.

The West Londoners’ forwards were a smart lot, and in the latter part of the first-half they did much excellent work that it would have been no surprise if they had scored.

The most disappointing man on the home side was Warner, who was nothing like so good as in the practice games, in which his shooting was creditable.

Jones his partner, played clever football, and gives promise of being one of the best of the Spurs’ forwards.

Houston bustled about to a considerable extent, and some of his work met with warm approval, but he was not altogether in harmony with his colleagues. Once he incurred the displeasure of his opponents by charging Collins in what appeared to be an unnecessary manner, although we don’t suppose he did it wilfully.

Kirwan and Copeland played with their accustomed skill, but Bowman, Hitch and Newlands allowed them comparatively little latitude. The Rangers have a fine half-back line.

Hitch has come back to them from Nottingham Forest, and Skinner, who went to Grimsby, has also returned. Bowman, the old Aston Villa man, makes up the trio. They will do great service for the West Londoners this winter.

Behind them they have two capable backs in Edwards and Newlands, who also performed well. Collins made one weak save in the first minute, but for the rest of the match did splendidly.

There was nothing to complain about in the defence of the Spurs. The Rangers’ forwards were clever, and had a dangerous way with them, and it says much for the work of the local halves and backs that Clawley had scarcely so much to do as his vis-à-vis.

Tait showed no signs of failing energy, while Erents was as robust and dashing as ever. Hughes was the most conspicuous of the halves. J. L. Jones found Hamilton and Colvin, the visiting right-wing pair, a very stiff handful. They had a happy understanding with one another, and much danger came from that quarter.

With regard to the game itself, no lengthy description is necessary. The Spurs were entirely in the ascendant for some minutes, and it seemed very possible that they would gain an easy victory.

Gradually the play opened out, and in the latter part of this half the Rangers had, if anything, the best of the exchanges. However, they were no better marksmen than the Spurs.

On two occasions, at least, they had excellent openings. The first time the ball was sent across from left to right, and Hamilton, when close in, had nobody near him to spoil his aim, but he entirely failed in his purpose. Colvin missed just such another chance, but his shot at any rate, went very close.

Jones, the forward, almost got a goal for the Spurs shortly before the interval. He sent in a tremendous shot and the ball struck the cross-bar. 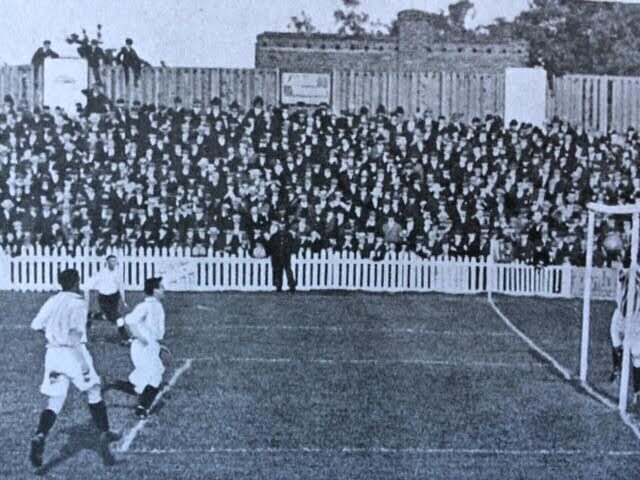 The excitement in the second-half was quite intense and owing to the strenuous efforts of the players, was maintained up till the last. Houston early, came into prominence with a clever shot, which he sent in after recovering from a fall. It swerved in the air and would have gone in at the upper corner if Collins had not saved.

The play fluctuated a great deal, but the Spurs became the most aggressive as time wore on and the Rangers had some anxious times. Houston went near enough to head the ball against the upright, and it was a wonder that it did not go in.

Five minutes before the finish it was scrimmaged through, but the referee disallowed a goal, presumably owing to an infringement of the offside rule. His decision caused great disappointment, as the crowd cheered very lustily as soon as they saw that the ball was past the goalkeeper.

Once during this half, Erents went through and put in a good shot, but Collins rendered his well-intentioned effort fruitless.

The match left something to be desired in the matter of scientific play, but it had the saving quality of being full of interest.’

(Both pics are taken from ‘The Tatler’. The caption to the bottom one reads: ‘The interesting point about this photograph, is that the ball appears clearly to have crossed the line, in which case, of course, a goal should have been scored. Yet no claim was made for a goal either by the players or spectators.’ Thanks to Colin Woodley for his assistance)