The 16th April 1994 sadly marked the final day of the old Loft. Rangers took on Everton at Loftus Road after a 1-1 draw against Chelsea three days earlier. The following match report appeared eleven days later in the Arsenal match programme:

‘Rangers said goodbye to the Loft with a thrilling win over Everton. The main talking point from the first-half was a disallowed goal by Devon White on 19 minutes.

Toffees’ keeper Neville Southall let the ball slip from his grasp, and White sent a Eusebio-style overhead kick into the net from 18 yards. But referee Martin Bodenham ruled that Southall had been impeded.

Rangers went close on the stroke of half-time when a Ray Wilkins volley was cleared from the jaws of the goal by Jackson. Half-time: 0-0.

The Merseysiders took the lead in the 64th minute. Anders Limpar picked out Tony Cottee, who hammered home left-footed.

Rangers found the perfect riposte within three minutes, thanks to a mother and father of a scramble on the goal-line. Ian Holloway’s cross eluded Southall and Devon White bundled the ball in at the third attempt.

Everton searched for all three points in their fight against relegation, and Tony Roberts pulled off brilliant saves from Ebbrell and Limpar. 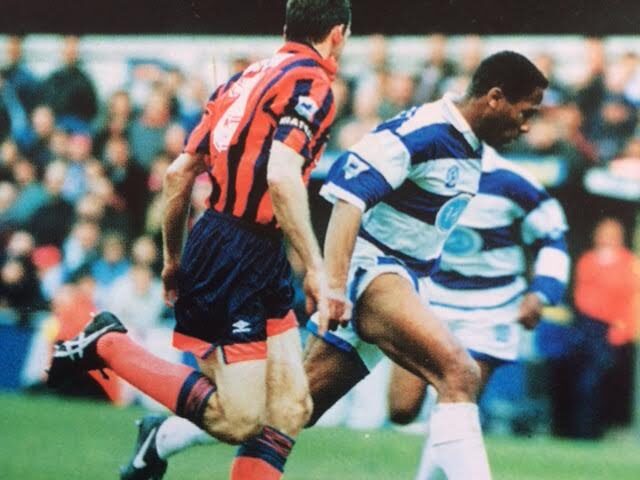 But it was Ferdinand who slashed home the winner for Rangers with just two minutes remaining. David Bardsleyplayed a slide-rule pass from the back and Sir Les held off a challenge before drilling into the bottom left-hand corner.’

There was some controversy over Devon White’s equaliser.Everton’s captain, Dave Watson claimed: “He definitely bundled it in with his fist. It was blatant, but the referee didn’t want to know.”

And in another newspaper report it was described as follows: ‘Just seven minutes later Devon White equalised with a bizarre goal, which appeared to come off his backside.’

Apparently, TV evidence on BBC’s ‘Match of the Day’ later that night was, ‘indecisive’.

There were emotional scenes at the end of the match. I had stood in the Loft since the 1960’s, but this was to be the final time for so many fans. The ground was all set to become an all-seater-stadium.