After a 2-0 win at Craven Cottage the previous week, on 2nd February 1980, the R’s took on Swansea City at Loftus Road. Peter Gorman wrote the following match report:

‘A winning goal, deep into injury-time, finally brought Rangers’ striker Paul Goddard in from the cold. It was Goddard’s second of the day to sneak a dramatic victory on the Loftus Road mud-flats and take him out of the shadow of 21-goal hot-shot Clive Allen.

The late winner was Goddard’s 11th goal of the season and it made manager Tommy Docherty remark: “The game is not won until you are going up the tunnel.”

While local boy Goddard was celebrating, team-mate Allen was down in the dumps because he missed six openings – three of them sitters.

Allen missed four chances in seven minutes in the first-half before he put Rangers ahead with a twice-taken penalty in the 38th minute after Goddard had been fouled by Jeremy Charles.

Swansea player-manager John Toshack was booked for arguing about the decision and two minutes later he was even more angry when Goddard scored after a defensive mess-up.

Steve Wicks ended a bizzare half by heading past his own keeper.

Toshack side-flicked a 76th minute goal, but the real drama came in the 91st minute, when the last of two frenzied Rangers’ corners ended with Goddard driving into the net from close range.’ 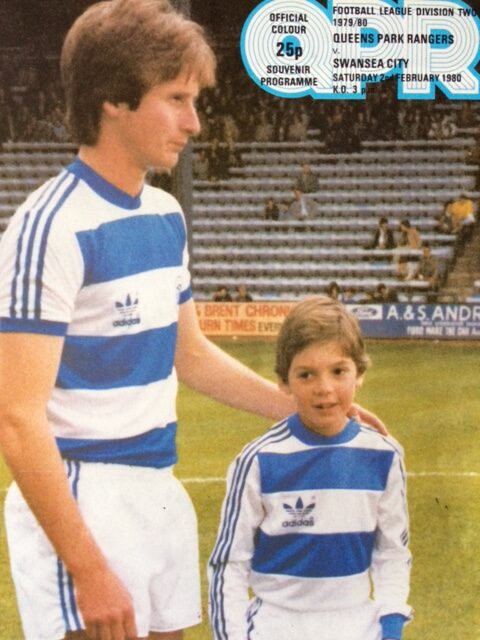 But Swansea didn’t see the funny side of this West End farce, played in a Shepherd’s Bush swamp before England manager Ron Greenwood. You could hardly blame the Welshmen for looking glum.

They gave Rangers a two-goal start, pulled level and had Tommy Docherty admitting afterwards: “I thought they were going to pinch it 3-2.”

At one stage it looked as if rain might even stop play. But if purists like Mr Greenwood were hardly amused by the sight of silly goals, amazing misses, players sliding yards on their rear ends, and the ball regularly sticking in pools of water, the drenched crowd lapped it up.

“In the conditions it was a good match,” said the Doc. “Young Clive Allen is upset with himself for not getting two hat-tricks, but I told him not to worry. The time to worry is when you don’t even get into the positions to take the chances.”

Most of the game’s five goals were gift-wrapped. Allen’s from the penalty spot in the 38th minute, came after Paul Goddard had been pulled down by Jeremy Charles. Swansea keeper Glen Letheran saved the first shot, but the kick was re-taken, and Allen rammed it home – his 21st of the season.

A minute later Rangers got their second present when Letheran failed to hold a suicidal back-pass by Leighton Phillips, and the ever-alert Goddard swept the ball home.

Still the presents flowed. Just before half-time Steve Wicks headed an incredible own-goal from Ian Callaghan’s cross to bring Swansea right back into a match that should have been long lost. Swansea player-manager John Toshack shook the Rangers defender by the hand.

And it looked as if the giant Tosh had got the last laugh when he pushed home a cross from substitute Neil Robinson in the 76th minute with not a Rangers defender in sight.

But there was no containing the irrepressible Goddard, whose second goal came two minutes into injury time. That goal, his eleventh of the season could be precious to Rangers.

“Of course, I still think we have chances of winning promotion,” said the Doc. “I think we are going to win every match.”

Bobby Hazell was still suspended, but he made his return the following Saturday in the 1-2 defeat at West Ham. Paul Goddard scored the R’s goal.

(Shown above with Glenn Roeder is the R’s mascot, Adam Busby of Harefield)