On 12th January 1963, the R’s lost 0-5 at Swindon. It was during the Big Freeze and Colin Woodley recorded his memories of that day last month.

But what angered Alec Stock even more was the state of the pitch. Hugh John’s wrote the following article for ‘The People’:

‘Alec Stock, Queen’s Park Rangers’ manager, said yesterday that he would make an official protest to the Football league about referee Norman Hough’s decision that Swindon’s pitch was fit to play. “The conditions were absurd,” he snapped. “It’s a wonder no-one broke his neck!”

And Stock wasn’t fuming just because the team were thrashed. He made his first protest an hour BEFORE the kick-off as fresh snow fell on the sand-covered pitch.

He disagreed with Swindon manager Bob Head, who said: “I’ve played on far worse surfaces than this,” and so referee Hough was called in to give his ruling. “We’ll play,” he decided.

“I am registering an official protest,” said Stock. “I give Swindon full credit for providing a pitch of any description in these conditions. But ice covered by a thin layer of snow and sand is no surface on which to provide professional soccer entertainment.”

Hough snapped back: “I have been a referee for 13 years – and I say the pitch is playable.”

The argument continued until Hough walked back to his dressing room after threatening to report Stock to the League.

I thought the pitch was treacherous and am on the side of those who said this game should not have been played. But I find no fault with the result. The conditions were the same for both teams and it was Swindon who mastered them.

For a few minutes, despite brave attempts by talented players, the game rumbled along like a kindergarten kickabout. Then, having decided this was no day for kid-glove tactics, Swindon snapped into action.’ 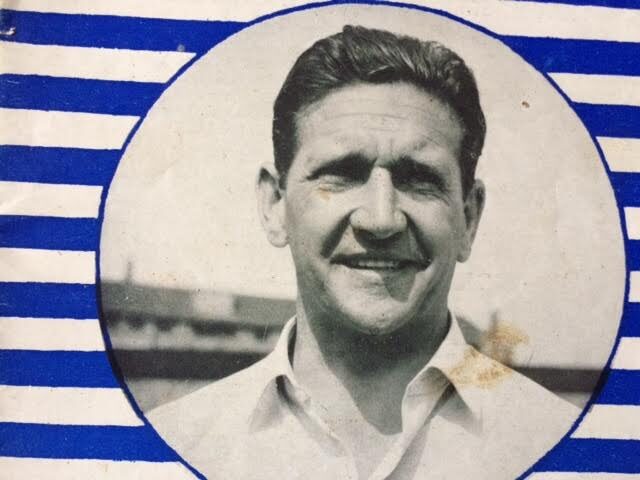 The reporter from the Hammersmith & Shepherd’s Bush Gazette was also present and aired his views on the row the following Thursday:

‘If after reading the report of Rangers’ game at Swindon you feel like writing to me to say it is biased in favour of Queen’s Park Rangers, don’t bother, it is!

I drove 70 miles on Saturday morning, the last 20 over extremely dangerous ice-covered roads, expecting to see a football match.

It was not worth the trouble, I merely froze to death in the Press box for 90 minutes watching a farce. Don’t expect me to have any love for the Swindon Town Football Club.

From early on last week the Swindon club had been exclaiming loudly to the Press and Rangers that their pitch was perfectly fit for play. Everybody believed them, but it turned out to be the biggest confidence trick imaginable.

Referee Mr N. N. Hough from Littleborough, who decided play was possible despite the strong protests from Alec Stock, is also a marked man as far as I am concerned. He was, of course, entitled to his own opinion, but personally I think it was a very stupid one.

Conditions around the Swindon ground area generally – roads, depth of snow and the weather – were at least twice as bad as in London.

How was it possible therefore for the Swindon pitch to be playable while not one game in London was possible? Don’t tell me that little Swindon were willing to spend more time and money on their pitch than the wealthy London First Division clubs.

The pitch at the County Ground had been cleared of snow which left a thin layer of ice covering the playing surface. The Swindon management and Mr Hough called it compressed-snow, but I am sure Sonja Henie (a famous Norwegian figure skater) could have given an excellent performance on it.

As things turned out, Swindon won 5-0. A result which could cost Rangers promotion. Clad in basketball shoes, Swindon adapted themselves much better to the conditions than boot-clad QPR, but you could not call it football.

Practising on the pitch during the week, the Wiltshire menobviously learnt how to play this version of ice-hockey played with a large round ball. Rangers had no opportunity to do so and had been led to believe that they were going to play on a pitch perfectly fit for normal football. What a fraud!

As I said before, all my sympathies on this occasion are with the Rangers, but only because I think they were swindled. My opinion about the pitch would have been the same if QPR had won 10-0.

Alec Stock made it very plain that he thought professional football should not be played in these conditions long before the kick-off. I was in agreement with him but reserved my final judgement until play had been in progress ten minutes or so.

By then I had definitely decided that any football was farcical in these conditions, long before Swindon had taken the lead and at a time when victory for Rangers was still a possibility.

I take my hat off to the 22 players who performed far better football than one could really expect. But let me repeat, it was not football!’

Rangers’ next match was nearly a month later when they took on Northampton Town in February.