A report appeared in the West London Observer on the following Friday:

‘There were two striking features about the open-air boxing tournament which was held at the Queen’s Park Rangers FC ground at Shepherd’s Bush on Saturday. They were:

1. Will open-air boxing pay?
2. The return to the ring of Alf Mancini?

There is little to discuss about the first feature. Give the public what they want and nothing else, is the only policy for the promoters to adopt.

Messrs. Jack Gerrard and Fred Dyer carried out that policy on Saturday and were in return rewarded with a capital attendance. The other feature – the possibility of Alf Mancini returning to his best form – remains to be seen. 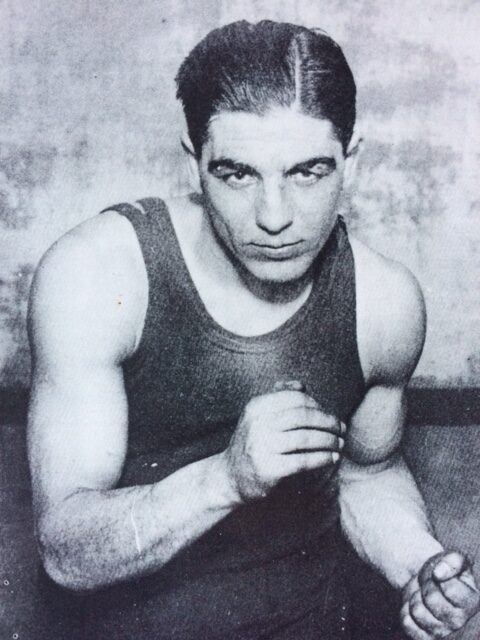 The Notting Hill welter-weight won comfortably on Saturday, but his opponent, one Carlo Galbusera (Italy) is not in the same class as Alfred. Galbusera possesses little knowledge of the finer arts, and with the exception of toughness, has few assets to his name.

Like most continental boxers, he was well covered, and in the first round sought close quarters, but with little success. Mancini took things coolly in the opening round and continuously made Carlo hit the air.

Then Carlo landed a blow and started the cheering. Alfred countered with straight-arm punches and made the Italian hold.

The second round was a repetition of its predecessor. The third looked like being the same until Carlo landed another blow, which made Mancini hit him and stagger him, and certainly hurt the visitor until the gong went. The Notting Hill man took the next few rounds by wide margins.

In the seventh we saw something of the Mancini of old. The latter commences to give a few samples of his left hook to Carlo, and the latter showed a complete dislike to these. He was forced to hold until Mancini got free and sent over another left hook.

The blow knocked the tough Italian flat on his back, but he rose pluckily, although certainly groggy. At this juncture the Italian’s left eye began to close, and Mancini played on the damaged optic until the conclusion of Galbusera’s retirement in the tenth round.

In a 12-rounds supporting item, Johnny Croxon (Notting Hill) defeated Charlie Thomas (Hammersmith) on points. There was little in it.

Patsy Butler (of Barnes) met with another defeat, this time at the hands of an Irish lad, in the person of Pat Cassidy, who won by a wide margin in an 8-round contest.

In a ten-rounder, Con O’Leary (Ireland) stopped Tom Hall (Blackfriars) in the third round upon the referee’s intervention.’

I wonder if this was the first boxing event held at Loftus Road?