QPR spending part of the pre-season in Sweden was a common feature during the 80’s and especially during the first half of the 90’s. But the first visit actually dates back to 1973, when two friendlies were played.

From 1990 to 1994, with the exception of ’92, Swedish fans could watch their heores every year. Every year four friendlies were played, except in 1994, when six matches were played over the course of eight days.

The Swedish Hoops website has listed all these friendlies complete with score and scorers, apart from one match, where the scorers were missing. Recently a member noted this and, as he had attended the game, set out to find out who scored our goals in the 5-0 win over Edsbro on Sunday 28th July, 1991.

As a subscriber to the local newspaper, ’Upsala Nya Tidning’ (UNT), he had access to their online archive and found not only the scorers, but also articles written ahead of and after the match.

He mentioned this on the Swedish Hoops messageboard, which prompted a couple of other posters to write about their memories of the match. 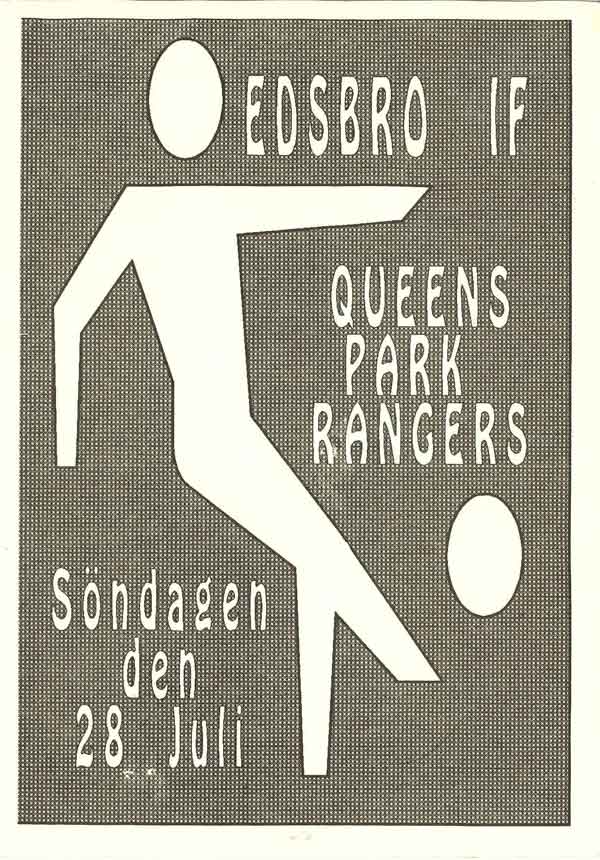 Another member made a road trip of about 1,200 miles to watch the match and one or two others found their programmes in which he had written down the shirt numbers of the players.

As 1 to 11 was still common practice at the time they helped us shed light on how QPR lined up on the day.

Two days before the game there was an article in UNT about the upcoming match, but it was not the main focus as 2nd tier side Sirius were playing Liverpool in the city of Uppsala, 35 miles west of Edsbro earlier the same day.

For those not familiar with Swedish geography, Uppsala and Edsbro are about an hour by car, north of Stockholm.

The article described QPR as ’a colourful side fully established in the First Division’ and named Rodney Marsh as possibly their greatest player of all time and then focused on manager Gerry Francis and on Ray Wilkins with World Cup players, Paul Parker and Jan Stejskal also getting a mention, together with Roy Wegerle.

It was also mentioned that the different kick-off times made it possible to watch both Liverpool and QPR in action the same day.

Home side Edsbro – located in the village with the same name and with just over 500 residents – were in a regional Division 3 group, the 4th level of about 10 in Swedish football at the time. Despite this being a decent amateur level, their matchday squad was boosted by about ten guest players from nearby clubs.

The match kicked off at 3pm and was the opening match of the tour. QPR fielded a good side, notably with David Bardsley as a winger, and as expected dominated the match from kick-off.

Edsbro defended well during the early stages and the first attempt on goal was a shot by Andy Tillson after 10 minutes.

Rangers continued to threaten and won two corners before taking the lead on 25 minutes, when an unmarked Wegerle put the ball past goalkeeper Eriksson.

Nine minutes later a pass from Wilkins to Les Ferdinand cut the home defence open. Ferdinand then found Andy Sinton and the England ’B’ International made it two.

Wilkins again was behind the third goal just before the break. This time his pass found Wegerle, who set up Ferdinand for the goal. 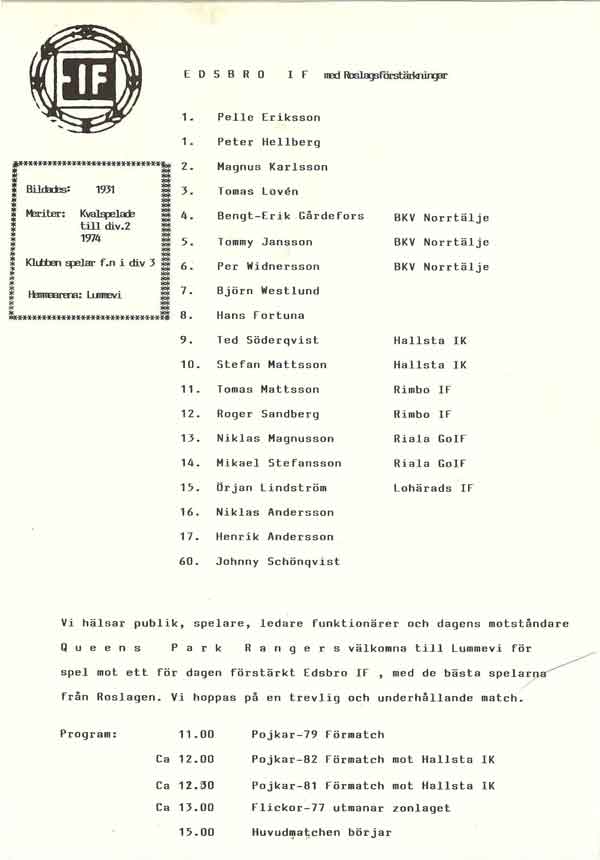 Swedish newspaper reports on English teams often mentioned that their communication on the pitch was on another level, both in terms of talking and loundness, and the UNT match report was no exeption.

Edsbro came out for the second-half with the intention of trying to shoot from distance and guest players Söderqvist and Mattsson both made good attempts early on.

QPR’s fourth goal came on 65 minutes when substitute Bradley Allen headed the ball in after the Edsbro defence had failed to clear. Allen then got his second just before the final whistle when he went past several opponents and finished with a low shot to the keeper’s left. 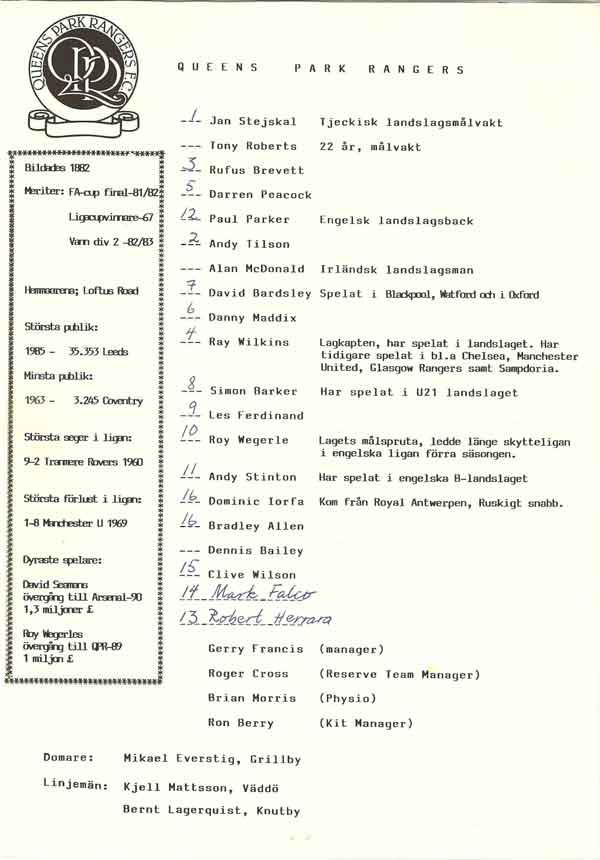 The reporter from UNT was impressed with the Rangers showing and particularly with Ray Wilkins. The big disappointment of the afternoon was the attendance of only about 600!

Mr. Jansson, a representative of the hosts, criticised the FA of the Uppland district for hosting the Sirius versus Liverpool match on the same day, despite them knowing that this match had already been arranged.

He also stressed that the clubs and not the district FA, should be the ones to arrange these types of matches and also pointed out that he didn’t blame Sirius in any way. 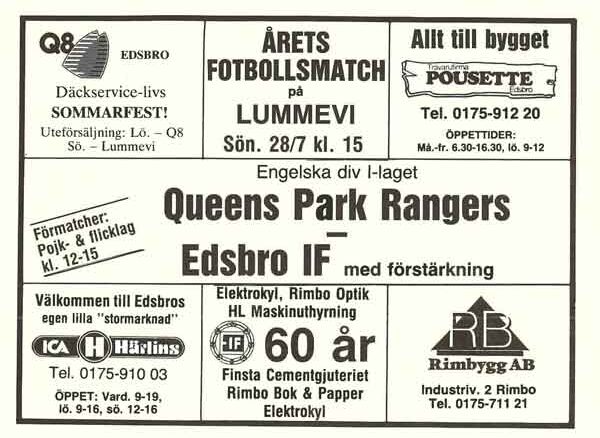 In Uppsala, Sirius held Liverpool to a scoreless draw in a poor match in front of 2,500. The attendance was branded a ’scandal’ by a Sirius official as Arsenal, also on tour in the Stockholm area, had attracted a crowd of 5,000 the week before and Sirius had hopes of at least 6,000 passing through the turnstiles.

QPR played three more matches during the coming week, all against lesser known sides, and conceded just the one goal. IK Viljan were beaten 4-0 the day after the Edsbro match.

Two days later IFK Kumla were defeated 7-1 and on 3rd August QPR put eleven past Krylbo IF before returning home.