The following article appeared in a 1983 football magazine:

Tony Sealy starts the 1983-84 season as a hero only a year after he seemed to be heading for the soccer scrapheap.

Sealy, born in London on May 7th, 1959, was signed as a professional by Southampton when he was 18.

During the 1977-78 season, he managed to make two full appearances plus five as a substitute. Despite the bright start, Tony was allowed to go to Crystal Palace in March 1979.

Again, he struggled to make the grade. After making just 16 full appearances plus eight on the sub’s bench he was loaned to Port Vale just 11 months later.

But suddenly he found himself back at Port Vale on another loan period. His second spell at Vale Park was to prove the turning point of his career. In six league appearances between February 6th and 27th 1982, Tony managed four goals and his confidence grew. 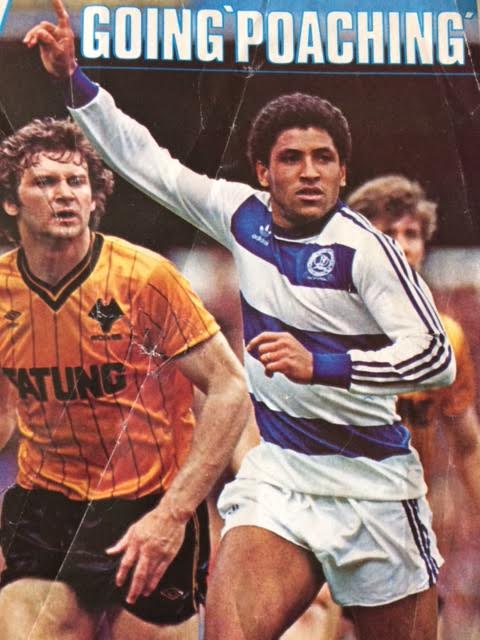 At the start of last season, Sealy proved he could be a major force as Terry Venables and company made a determined effort to get out of the Second Division. Among his 16 league goals of 1982-83 were some superb efforts and vital goals.

After starting brightly with two against Cambridge in their second game, he had to wait until the return at the Abbey Stadium three months later before he was on the mark again.

Sealy then began to score regularly as Rangers opened a gap at the top of the Second Division, which eventually led to them winning the Championship by ten points from runners-up Wolves.

As the Loftus Road club prepare for their first season back in Division One since 1978-79, the speed and goalscoring power of Tony Sealy could prove crucial.’

He arrived at Loftus Road from Crystal Palace in March 1981 for a fee of £80,000. Tony made his league debut later that month in the home game against Derby County.

His first goals for the R’s were the two he scored in the penultimate league game of the season against Cambridge United.

Tony went on to make 68 league and cup appearances, scoring 18 goals, before moving on  to Craven Cottage (for the same fee Terry Venables had paid for him) in January 1985.

He later played for the likes of Leicester City, Sporting Lisbon and Brentford, before finishing his playing career with Hong Kong FC. Tony went on to manage them for a number of years.