‘Abandoning their train at Ealing Broadway and completing their journey by trolley-bus, Swindon Town finished their “Cook’s tour” by “missing the boat” completely at Loftus Road, the Rangers netting seven times without reply.

The Rangers’ display of free-style skating on an icy pitch (admirably suited to their close passing tactics) earned them two more valuable points and their highest score of the season.

After Williams had tested Allen in the home goal, Powell gave Rangers the lead in the seventh minute, Burton failing to hold a hard, rising drive.

Rangers dominated the game, but mainly owing to fine work by Burton, failing to increase their lead until the 21st minute when a harmless-looking centre by Smith, missed by right-back Young, gave Pattison the opportunity to put Rangers further ahead.

Swindon, like the proverbial egg, were good in parts, but found full-backs Jefferson and Dudley sound throughout, only the Stephens twins giving fellow War-prisoner Allen saves worthy of applause. 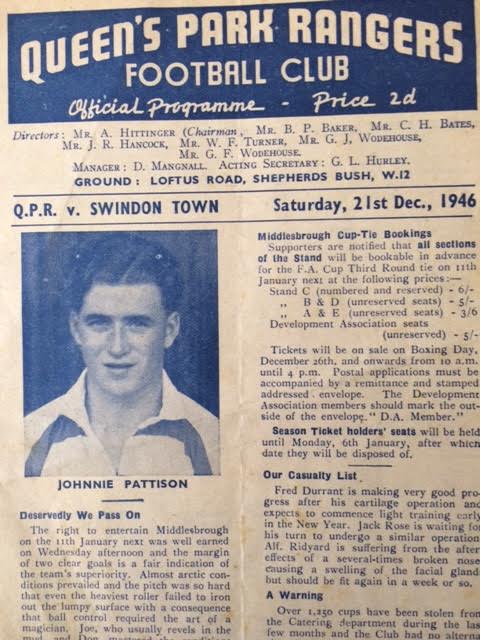 Changing over without an interval, owing to bad light, Rangers continued to impress, Hatton heading through from a fierce Pattison cross within four minutes, followed seven minutes later by a grand solo-effort goal from Mills.

A brilliant snap-shot by Lucas was neutralised in masterly fashion by Allen, but Rangers maintained their all-round superiority, and in the 72nd minute McEwan took advantage of a well-placed ball from Pattison to put Rangers five up.

With the light failing badly in the closing stages, Swindon made continued appeals for abandonment, but play proceeded, Pattison and McEwan celebrated by notching two more good goals.

Topical laurel wreaths to both teams for a grand display under difficult conditions, with special praise to linesman E. Thomas, who, called upon to referee at short notice, brought honour to a much-maligned profession.’

Mr G. Hann had sent a telegram saying that he was stranded in fog and would be unable to make it to the ground, so one of the linesmen, Mr E. Thomas, replaced him. A deputy linesman, clad in his lounge suit, ran the line.

It was claimed that the referee had decided to play only 40 minutes each-way, but it turned out that this had justbeen a suggestion. The Football League later announced that the match had indeed lasted the full 90 minutes and was therefore properly constituted.

The match programme issued the following warning: ‘Over 1,250 cups have been stolen from the Catering department during the last few months and the Club have no alternative but to prosecute a person caught leaving the ground on Wednesday with two in his possession.

Only by this means can such a despicable practice be stopped. In future, persons will be employed to watch out for the petty pilferers and every proven case will be prosecuted.’